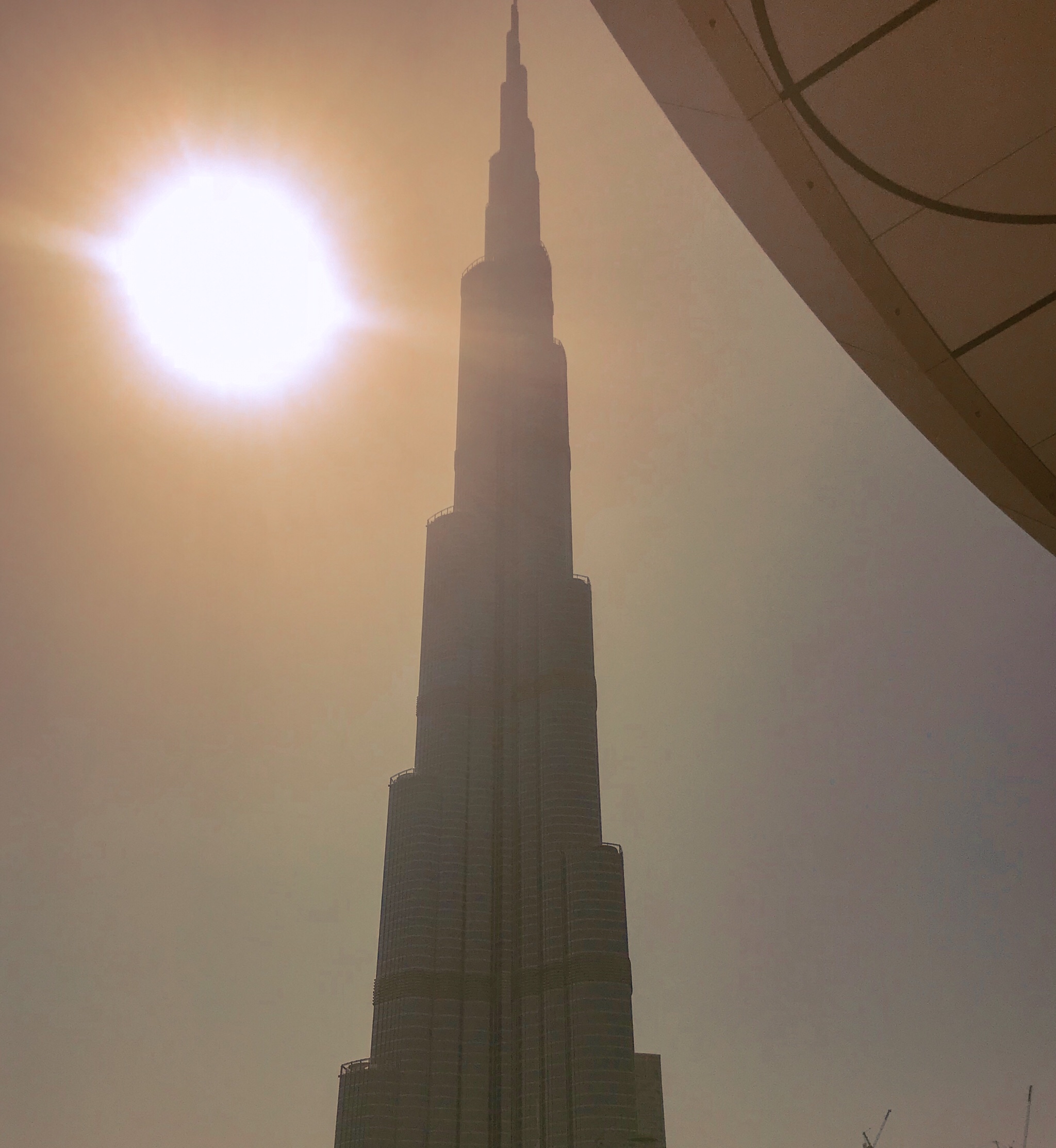 Truth is that we booked this destination as a stand alone holiday before we decided to take the year off to go travelling and chose Dubai solely on the availability of the Free air miles flights with British Airways as I had both Avios points and a companion flight to take advantage of, BUT only a very limited window in which to us them, a window made even narrower in trying to find availability of such flights within school holidays. I tried to find flights to several Caribbean destinations & Florida but alas no availability. I finally found seats to Dubai so it kind of won by default.

I could never describe Dubai as ‘beautiful’ and yet something about its infrastructure, iconic buildings and architecture keeps drawing me back. This is my 4th trip to Dubai although have previously come in September when temperatures are a little milder.

You could NEVER be bored in Dubai and I strongly believe everyone should make a trip here at least once in a life time. There is something to do there for everyone; from extreme sports such as skydiving, to mid range excitement including dune bashing, sand ski-ing, incredible water parks, indoor ski-ing and Ice Skating. Or of course you can take the opportunity to simply relax in the many opulent hotels (most with spas), or go shopping in one of the several enormous malls. (Combine a trip to the Dubai Mall with a visit to the Dubai Aquarium, the dancing waters at the Fountains and of course the tallest building there the Burj Khalifa)

BELOW: Dinosaurs, Sharks, Crocodiles and the Burj Khalifa – all part of a trip to the Dubai Mall 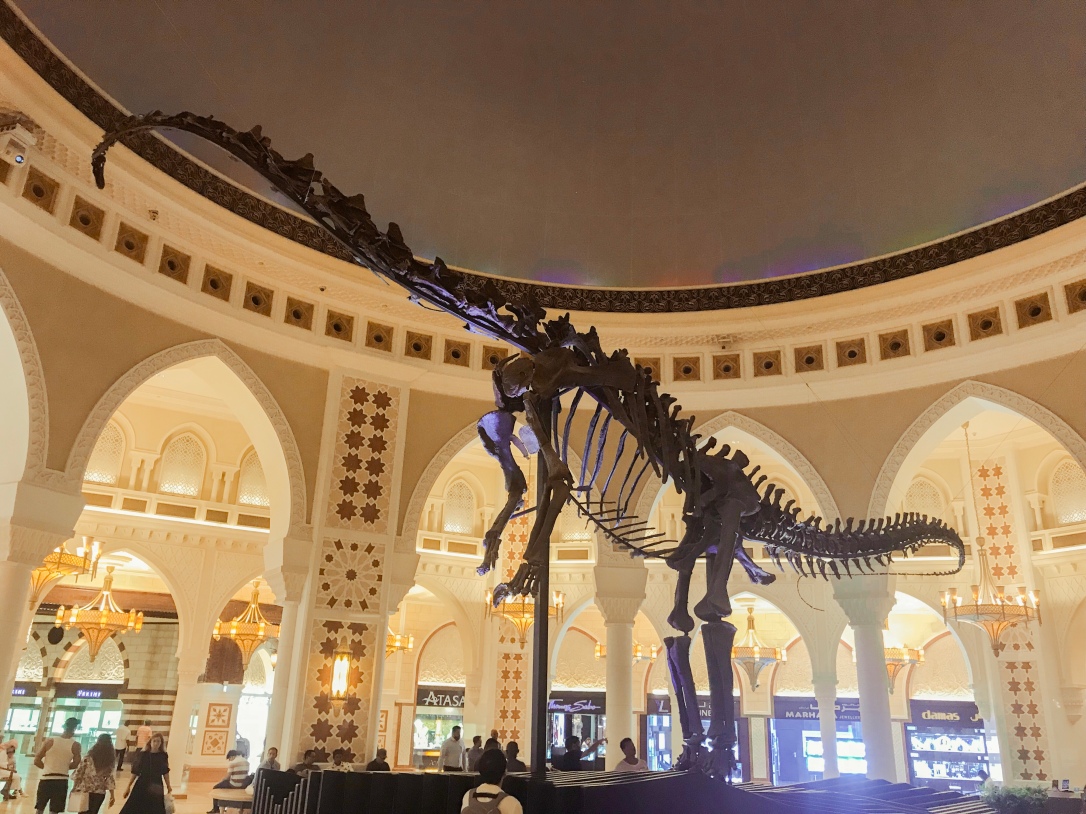 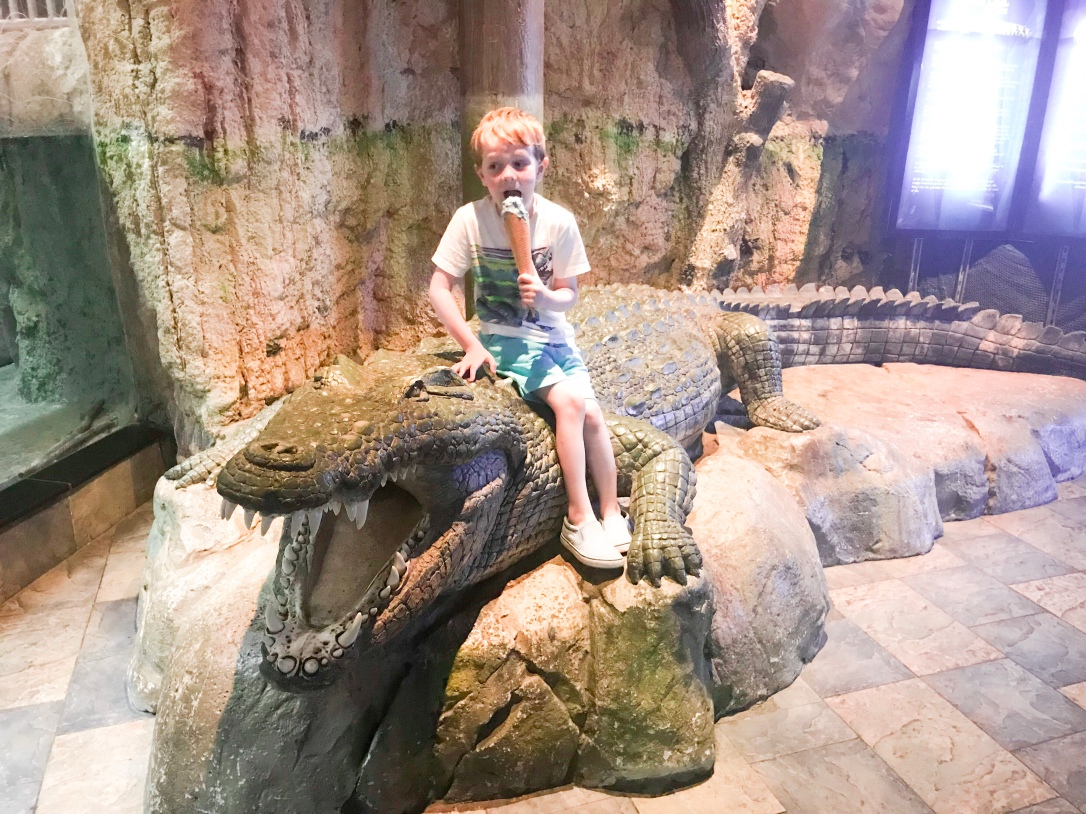 We stayed at Le Royal Méridien Beach Resort and Spa which is located close to Dubai Marina. From check-in to check-out everything was perfect. If I had just one minor complaint it was the sheer volume at which the World Cup was relayed on their big screens in the garden. I appreciate that many people wanted to watch the football but the volume was absolutely ridiculous and un-necessary. Certainly not fun when it’s still blaring out at almost 1am and you are trying to get a 6 yr old to sleep!! I didn’t mind the late night as much as I did having a tired, grumpy son the next day..

Other than that our stay there was perfect. Our room was clean and spacious with a great view over the pools and to sea. We also loved sitting out on the balcony watching all the parachutists land at the nearby skydiving centre. (has not tempted me to try it however!). There is a well stocked mini bar in the room, which as with all hotels was somewhat pricey, but there is also a kettle with adequate free tea/coffee making facilities and best of all always around 10-12 FREE bottles of water left in the room every day.

Cameron also loved the fact that housekeeping staff tucked his soft toys into bed and left him a newly made towel animal every day too which provided him with great delight and excitement every time he returned to the room. 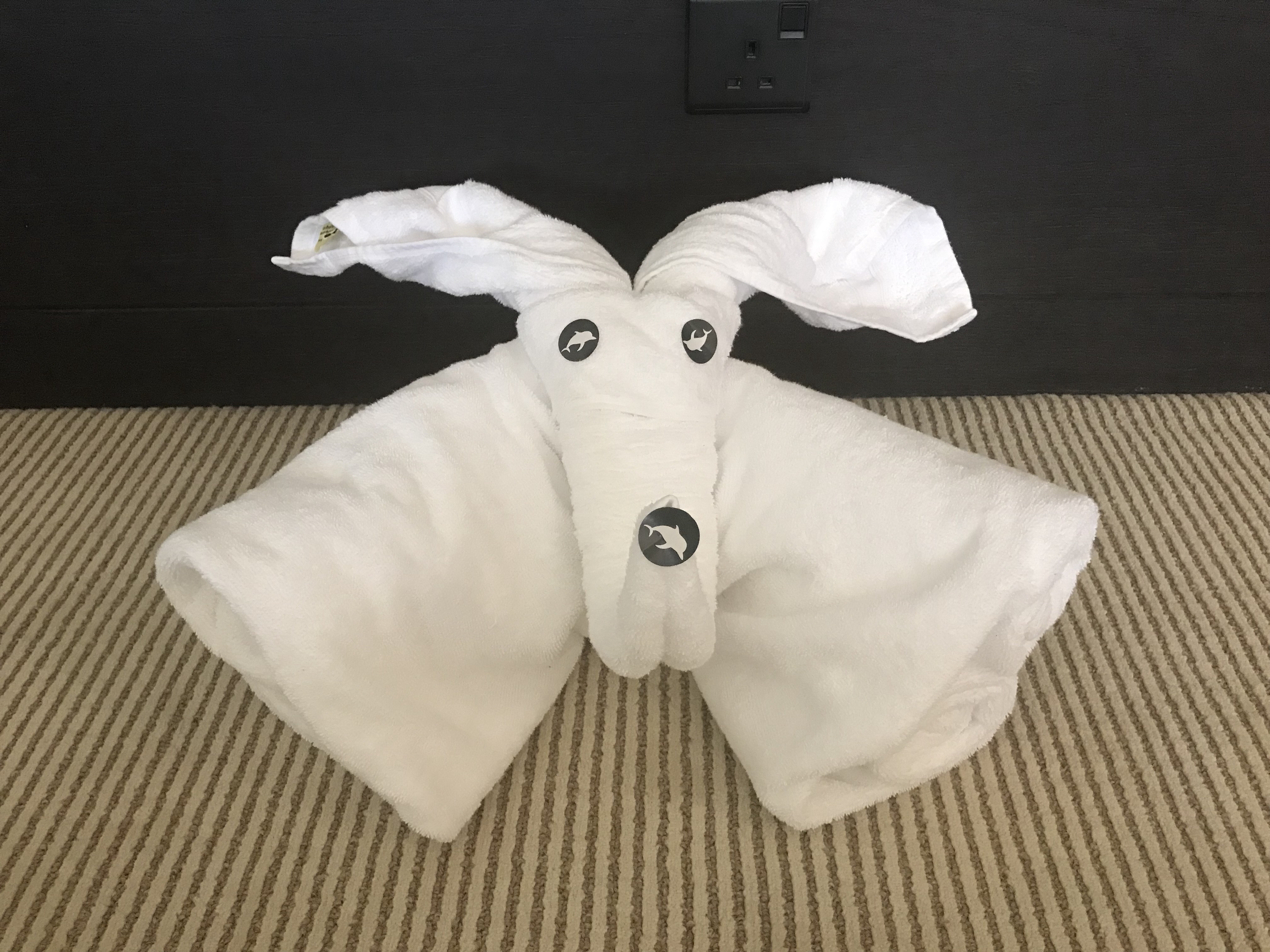 The hotel was spotlessly clean (this included grounds, pool area, beach and toilets). We missed the new pool being opened by just 4-5 days but enjoyed watching the finishing touches being made to it and being filled for the first time. (All of which we were able to view from our balcony).

Every member of staff was friendly, polite and helpful and went out of their way to make us feel welcome. Because the heat had been so extreme we didn’t wander too far away to eat and with such an extensive choice of restaurants on site you didn’t need to. All food was exceptional and whilst a little more expensive that you would pay elsewhere was not ridiculously over priced.

The seafood from the fish market at Geales restaurant was divine. You choose your fish from the ice bar and then either choose yourself how it is cooked or take the chefs recommendations. I opted for the lobster tail and scallops and took the chefs suggestion of pan fried scallops with the lobster cooked in cream, white wine and garlic. Not only was the lobster nicely presented and removed from its shell for easy eating, it was possibly one of the nicest meals I have ever had in my life, the only down side however was that I had no room for dessert!

I also have to make an extra special mention to the staff at Maya, the Mexican restaurant within the hotel grounds as they were SO attentive and lovely to us, making a real fuss of my son, which naturally he lavished. The food here was also lovely, however I felt the menu was a little limited.

ABOVE: Mexican Evening at Maya – one of numerous restaurants set within the Le Royal Meridien Hotel Complex.

BELOW: Le Royal Méridien, inside and out 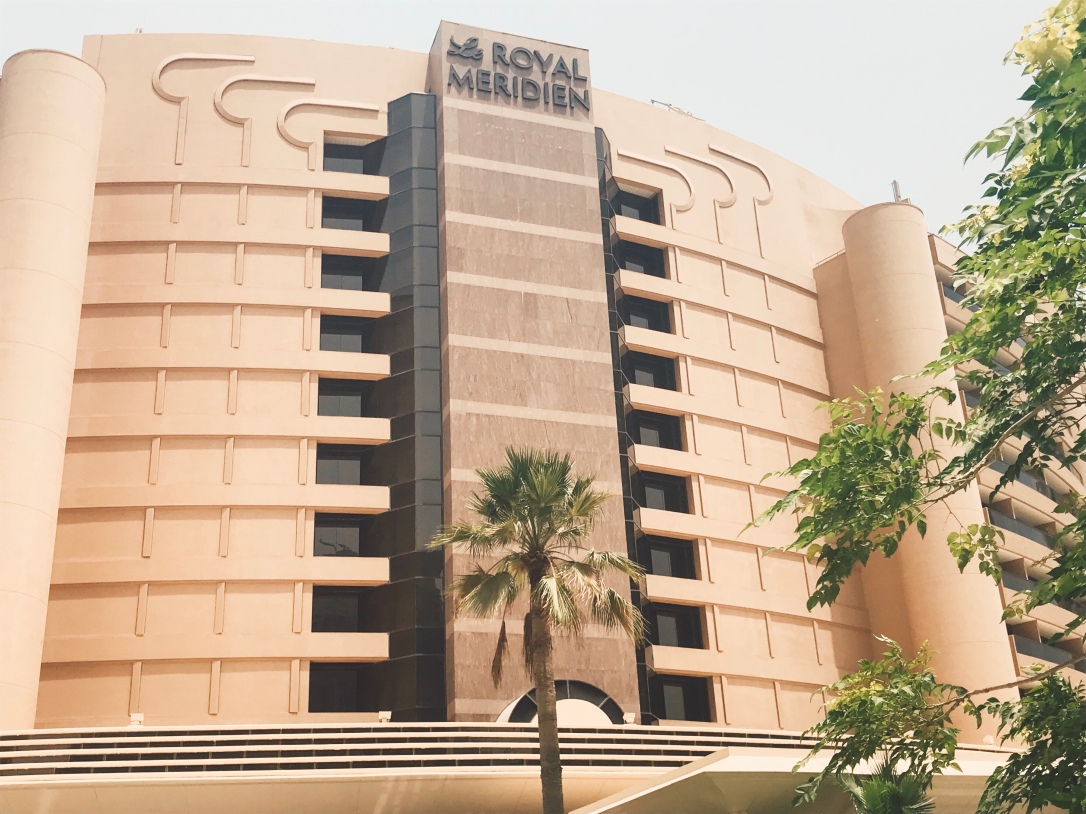 I had read before going to Dubai that Le Royal Méridien also have a first class kids club, however we did not explore this on this occasion as Cameron was happy to spend time with me at the pool & beach during our hotel time. I have to say that the slightly chilled pools were actually more comfortable than the sea. This was the first time in my entire life that I had to come out of the sea because it was TOO WARM!!! The pool also had a shaded swim up bar which is always a bonus.

Now travelling with a 6 yr old it was pretty much a foregone conclusion that we were not going to get away with a trip to Dubai without visiting ‘Legoland Dubai’. Somehow Cameron had already discovered this on YouTube and talked about going non-stop.

I was surprised however that when we got in a taxi from the hotel the driver didn’t even know where it was! Legoland lays on the edge of Dubai just by the border of Abu Dhabi, the taxi cost us around £20 from the Marina area. However when we arrived we noted there was also a tram stop right outside so the metro may be worth investigating too.

The first thing which struck me when we arrived was “where is everyone?” I was expecting huge queues as most theme parks generally attract, and having done Florida parks in the height of summer the heat does not generally detract people.

It was about a 10 minute walk from the taxi drop off point to the park area itself, passing through the large complex of restaurants, shops, cafes etc (if you have done Florida theme parks it is a similar walk from car parks to main entrances) but this time it was like walking through a ghost town, we were literally the only people walking towards the gate and I kept questioning whether we were actually in the right place as there wasn’t another person in sight!

We were in the right place and again found ourselves to be the only people at the ticket office and entrance turnstiles.

There is a little Cameron in the bottom left hand corner, but where is everyone else??

My main concern in visiting Legoland on this trip was once again the heat, but I have to say that generally I was pleasantly surprised. Great care has been taken to put as much as possible in the shade, and there are many areas which are air conditioned, including the main central arena which hosts many of Dubai’s iconic buildings, including the Burj Khalifa all made out of Lego. 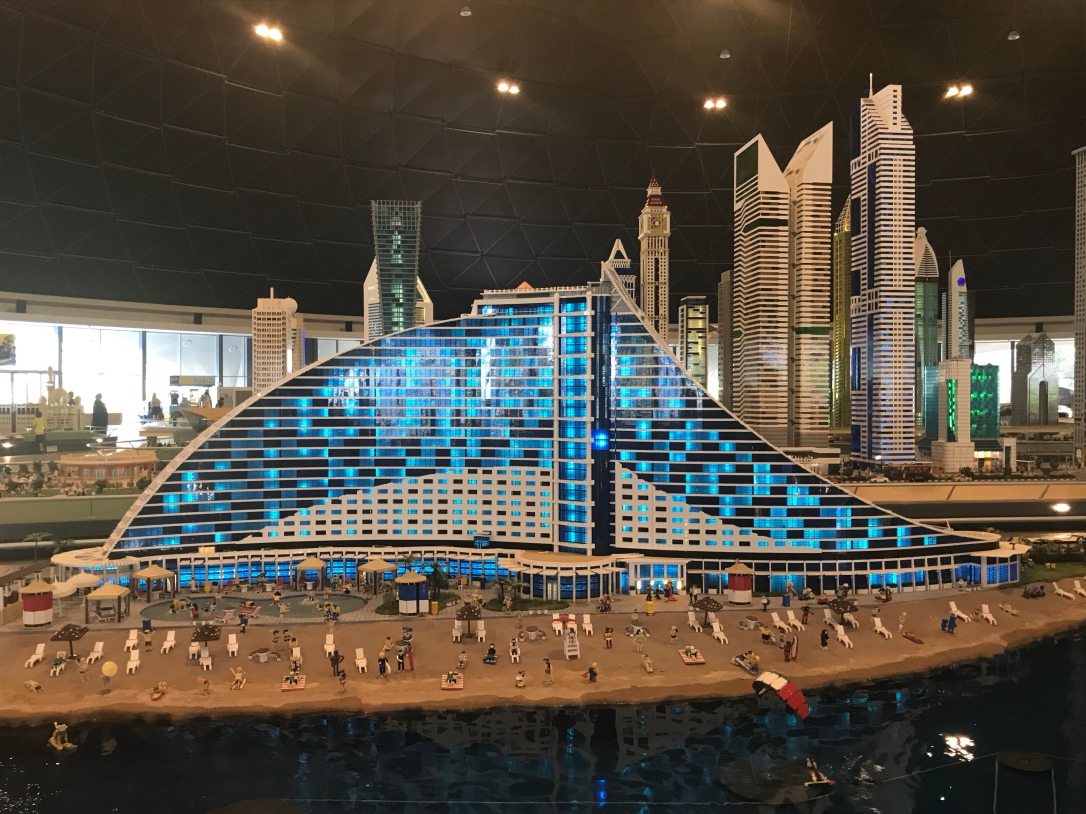 There are various sections of the park which go out from the main indoor Dubai display, Adventure Land, City Lego etc each with both breathtaking Lego sculptures and pretty tame rides for younger children. There are also plenty of places to eat & drink and adequate toilet areas throughout the whole park.

We didn’t have to queue for anything with the park being so deserted. Whilst the queuing areas did all appear to be in the shade, it still doesn’t provide a huge amount of respite from the intense heat, especially for young children. 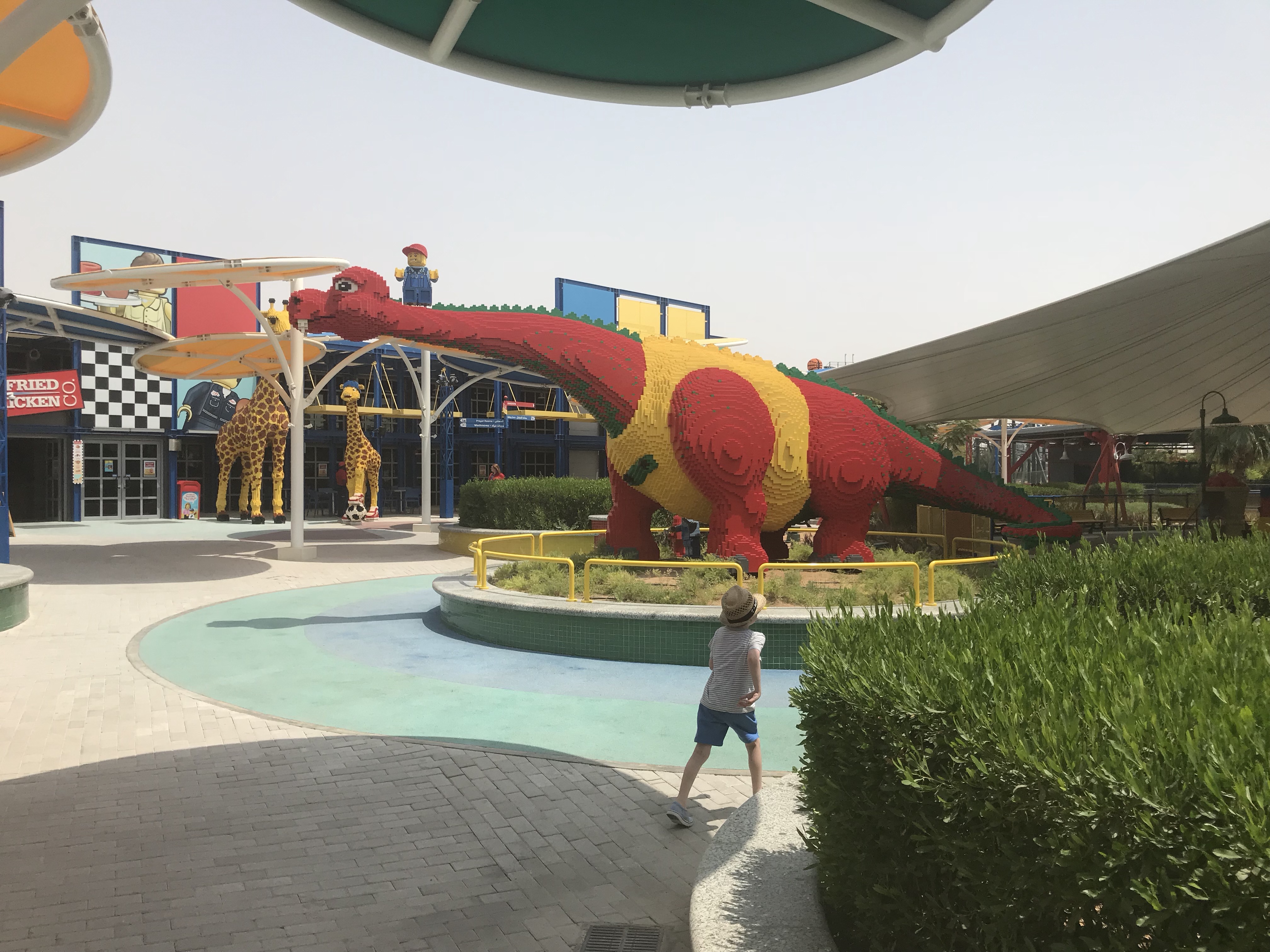 There are of course big Lego shops with toys for all age groups, including adults and every child’s all seemed to be very reasonably priced. (Cameron ‘of course’ brought and built a Lego train!!!) I did asked a lady in one of the shops if Legoland had only very recently opened and was hugely surprised when she replied “we have been open 2 years”. 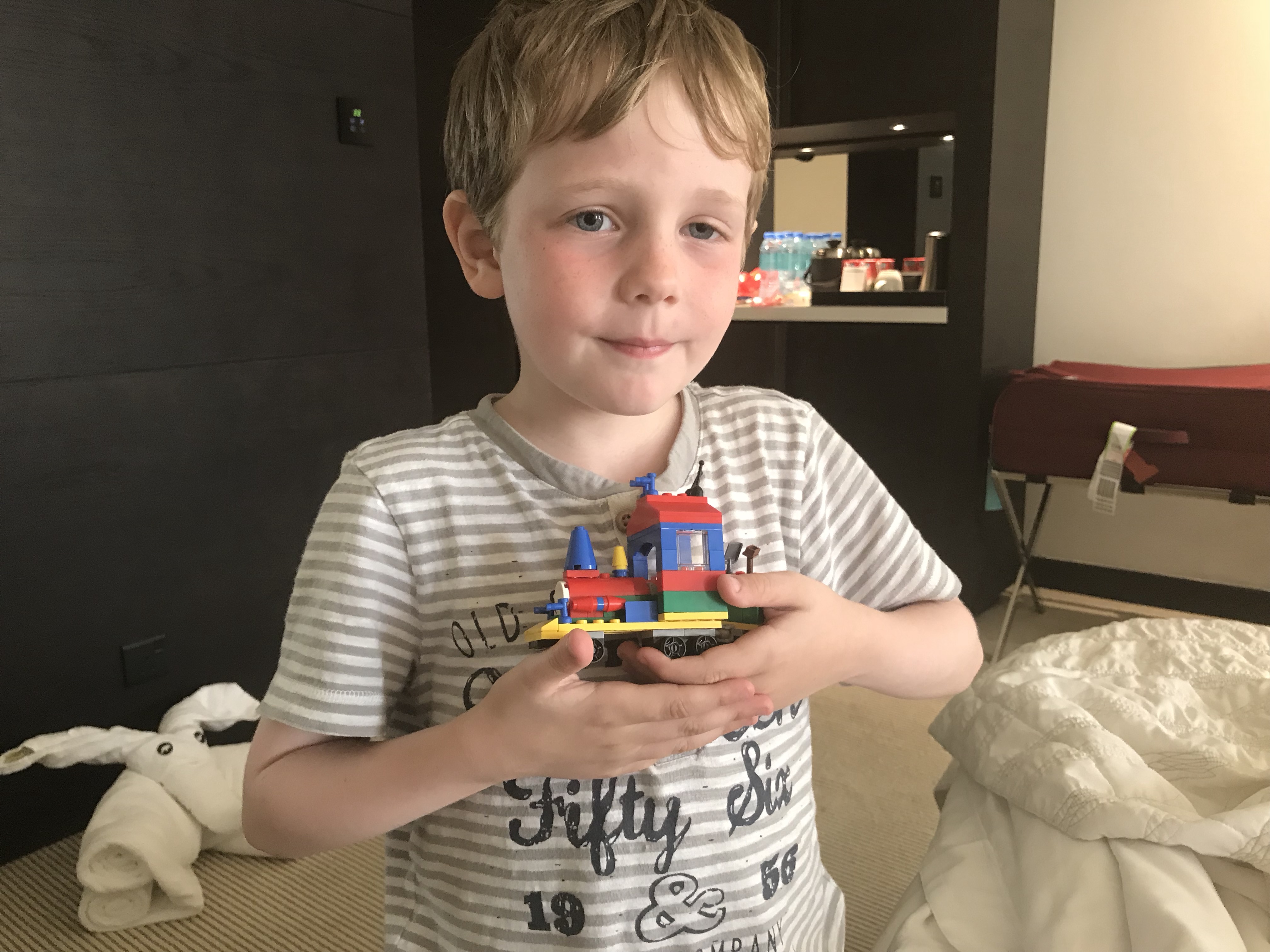 We spent around 3 and a half hours here (helped by the fact there were no queues for rides) it was enough with the temperatures being as they were but Cameron said it was the highlight of his holiday. If you are travelling to Dubai with younger children, I would definitely recommend a day here. The admission for the two of us was £100 however so not really a cheap day out for larger family. The Legoland Waterpark was situated directly next door but we did not visit this, there is not a huge difference in price to do both parks though.

Over all we had a really great week in Dubai although we were limited by the intense heat, Cameron really did struggle with it. It’s worth remembering that small children do not sweat and therefore it is harder for them to regulate their body temperatures). I will take him back again one day but at a different time of year when it is a bit cooler and also when he is a stronger swimmer so that he can enjoy the water parks too (having stayed at the Atlantis on 3 previous occasions I can tell you that the waterpark there is amazing!!)