Back to our roots:

Cameron has been fascinated today to learn that the ‘Irish Famine Memorial’ he saw actually represents his ancestors, in fact until today I didn’t pick up on the fact that he didn’t even know what the word ancestors even meant!. When we returned to the same memorial later this evening, he stood among the statues and without any prompting said “these people are my family”. His reaction and desire to investigate each and everyone of them individually was quite fascinating.

The memorial in Dublin is situated on the side of the River Liffy and of course represents all those affected by the Irish Potato Famine 1845-1849. You cannot fail to be moved by it and yet it is still pretty difficult to portray to a 6 yr old how 7 statues within the memorial represent almost 1 million people who starved to death and another 1 million who emigrated from Ireland during that period. It is impossible for him to understand the magnitude of the effects and yet seemed really keen to learn about them knowing the history this had linked to his family. (My fathers blood line)

My parents wouldn’t mind me sharing the fact that their own roots were pretty much poles apart. My mother, an only child, was exceptionally spoilt & from a fairly affluent West London family. She enjoyed private education during the war and immediate post war period. My father on the other hand – the son of a dustman was one of 7 children raised in a tenement building on the outskirts of Dundee and didn’t even see an electric lightbulb until he was 14.

The bloodline going further back shows the same pattern, my fathers great-grandfather came over to Scotland from Ireland in the potato famine, my mothers great-grandmother, a land owner in West London gave work to many of those who came to England from the famine.

I like to ‘think’ I am a good blend of both sides of my family, I have always worked hard to provide my family with nice things, give the kids a good education and nice holidays, but have never forgotten my roots and still feel like I lead a pretty humble and grounded lifestyle.

This gap year too is perhaps to show my children how you can enjoy both. I have just spent my entire life savings on 3 round the world flight tickets and all associated travel expenses. I have basically gone from having some substantial savings behind me to being absolutely penniless. Now don’t get me wrong, I know we are incredibly blessed to be having this experience at all, but the kids have quickly had to realise that instead of me saying “yes” to everything that I am now saying on a daily basis “no we can’t afford that”. We have gone from living in a nice 4 bedroom house surrounded by mod-cons and a nice car, to being squashed up in tiny hotel rooms, living pretty much hand to mouth and surviving solely with what is in our suitcases, we use public transport or we walk!! There are many, many lessons for ALL of us to learn this year but I hope that humility in particular is one that Cameron absorbs as we detach ourselves from an ever increasing material world.

Today was a great day of learning and world schooling for Cameron and also a huge reminder to me to never lose that connection from my ancestry and their fight simply for survival. If it hadn’t been for their fight, their will and the treacherous journeys which many made, we wouldn’t be here today.

I know that we have many distant ‘Kivlichan’ cousins in Canada as whilst many escaped the famine to Scotland, others sailed in the opposite direction across the Atlantic to Canada. We are now really looking forward to going to Canada/ USA next month and picking up on the Irish Emigration/Immigration stories from the other side. 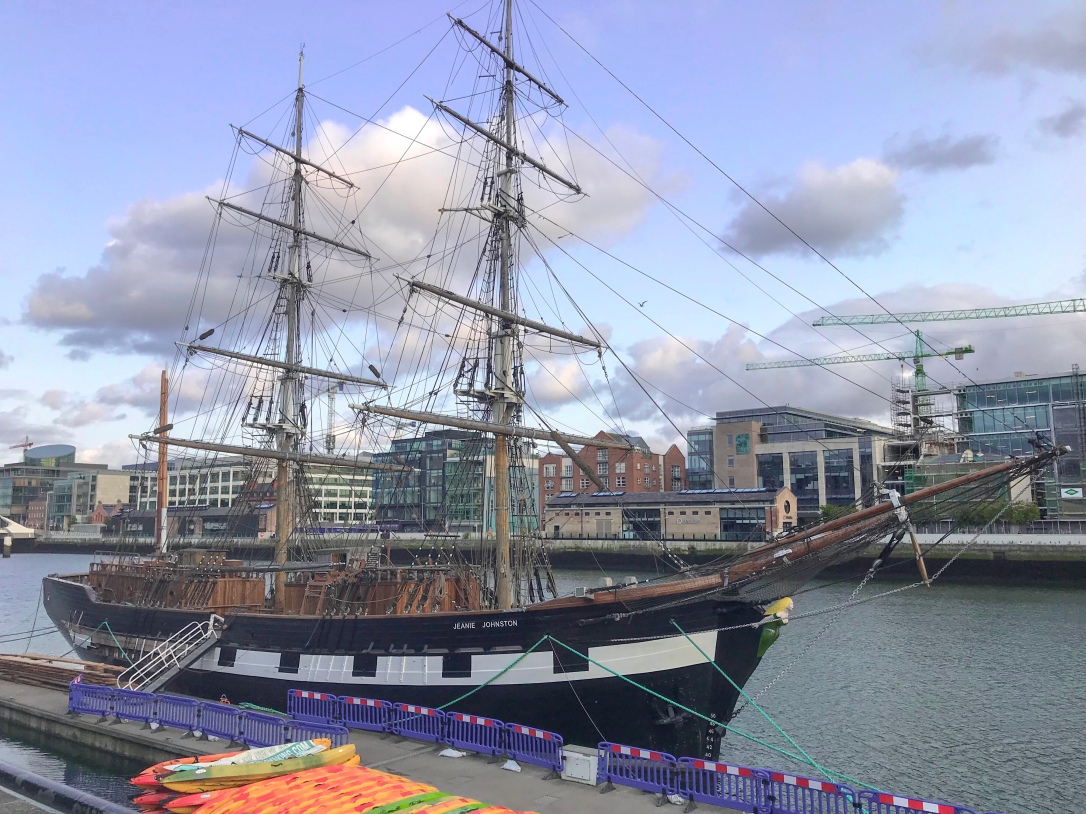 Above: Tall Ship ‘Jeanie Johnson’ (replica). The original made 16 journeys between Ireland and North American with those immigrants escaping famine raged Ireland.

Today Cameron learn’t about famine, emigration & ancestry; a little history, geography, sociology, anthropology…but most importantly I hope he learnt a little more about life. With each day that passes my fears and worries about taking him out of school for a year fade; quite simply WORLD SCHOOLING ROCKS.