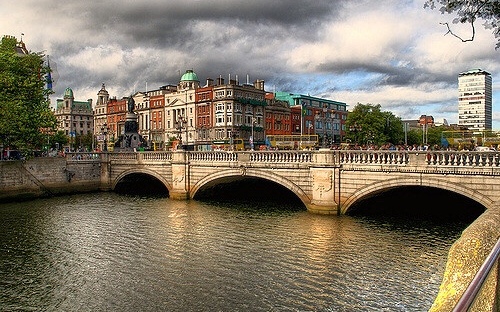 Review of the Arlington Hotel, Dublin.

I guess most people who visit Dublin are here either for a short city break or business trip, which is possibly just as well as our room was one of the smallest hotel rooms I have ever stayed in and without doubt had the least storage space I have ever experienced in any hotel around the world!

On the plus side this hotel is situated in a fantastic location, right on the edge of the River Liffy by O’Connell Bridge, it is central for shopping, eating, bars and multiple excursions – tour buses and river cruises depart directly outside. The other plus is that all the staff are exceptionally friendly and helpful.

Beyond that though I have to say that I was very disappointed with the hotel. The reception area is very dark and unwelcoming (the building not the staff). We arrived at the hotel at 1.30pm told no rooms ready and come back in an hour, no big problem, we left our luggage and went and had some lunch, came back at 2.50pm, still no rooms ready! Told that check in time was not until 3.00pm..and spot on 3.00pm we were given a room. The smallest hotel room I think have ever stayed in and well overdue for an update.

Now everyone likes a clean hotel but before we even got to our 4th floor room (426) we were overwhelmed by the smell of chlorine, and no there was not even a swimming pool in the hotel. My eyes were actually burning as I walked along the corridor and my 6 yr old son was holding his jumper over his mouth and nose. Once in the room the smell was still so strong it was making us both feel quite ill. Shutting the bathroom door helped a little, but I have never ever experienced such an intoxicating smell in any hotel.

Whilst the front of the hotel overlooks the river, our room was right at the back and our view (through FILTHY windows) was of a rather unattractive and dirty back street.

Held within the hotel is a ‘Celtic Nights’ dinner show, billed as the best Irish Music night in Dublin. Sadly we never got to see the show – we were joined one evening by my Auntie and Uncle and booked a table for the evening show which we were all looking forward to. When we went down to dinner that evening we didn’t have a ‘table’ but bar stools on the end of a very long shared bar with virtually no view of the show. Both my Uncle and Aunty suffer with sever back problems and would not have been able to sit on those stools for a 3 course meal and the whole show, plus we were so far away from the stage that even as adults we wouldn’t have been able to see a thing, let alone a hope in hell for a 6yr old. We asked to be moved to a proper table and be closer to the stage but they couldn’t accommodate us…..so we left!!!! We went back upstairs to the main hotel restaurant where were enjoyed a pleasant but by no means spectacular meal.

We were also told on arrival that our booking did not include breakfast and if we wanted breakfast it would be an additional €10 each. We made our initial reservation via booking.com for £390 for 3 nights and for that cost I would have expected breakfast to be included. It’s not that I mind paying but I have a 6yr old who eats less than a slice of toast for breakfast and at €10 a head, that makes it a rather expensive slice of toast!! We had breakfast in the hotel for one morning which I can only describe as ‘OK’ but then discovered a very nice diner just around the corner which served a much nicer breakfast for half the price. (Eddie Rockets – turn left out of the hotel and left into O’Connell street)

We enjoyed our stay in Dublin but if we came again I’m sorry to say that we definitely would NOT stay at the Arlington!