When you are paying out for any holiday, hotel etc it is only natural that you want to enjoy every moment, but when you are spending 12 months seeing ‘the world’ I guess there is a likelihood that you are going to occasionally find yourself in a place you don’t like.

That happened to me recently in Toronto, and I can’t even explain why, but as a result we left after just two days when we had planned to stay for 4. Of course booking ahead also meant that via booking.com I had pre-paid the hotel in full as well. Some could have said it’s ‘only’ another two days to stay but I cannot explain the feeling and anxiety which came over me the second we arrived and increased over the following 24hrs until I made the decision to cut our loses and leave early. It of course meant that I was paying out double hotel fees for those additional two nights but trust me it was worth it.

I visited Toronto 8 years ago with my then 13 yr old daughter. Although we had an OK-ish time, I remember thinking ‘been there, done that’ and having absolutely no desire to return there.

However, travelling right across Canada this time it seemed a logistical place to break up the journey. Also I have a great friend from Barbados who now lives there and whom Cameron and I were both longing to see again. He had subsequently been over to the U.K. on two occasions and I had missed him both times because of work commitments so I wanted to make the effort to see him and I knew he had taken time off work to spend time with us.

The time in Toronto didn’t start well, we made our way to the taxi rank on arrival at the airport and were herded into a car by an official but once we were in and on the way it dawned on me that I don’t think he was a licensed Cab – no meter on board and no notices displayed which you usually now see in licenced cabs but little too late to do anything about it. The taxi driver clearly had no idea where he was going and get having to look at the map on his phone..this was whilst going at about 90mph weaving in and out of various lanes of traffic and even as the traffic got heavier he was foot to the floor and then braking heavily to avoid the cars ahead. Absolutely no consideration for our safety or indeed comfort, especially as he was carrying a 6 yr old child in the car. I also think he over charged me but I couldn’t argue it as there was no meter and in all honesty I was just glad to arrive in one piece and get the hell out of his mobile death trap!

However as I looked at the hotel ahead of us I thought “OMG is that it?”. Admittedly we are deliberately stretching our funds and booking budget hotels, but the area, the hotel front just looked run down and filthy. More that that though I felt like I had been hit in the chest by something energetically. I am quite intuitive and I genuinely swear this hotel was haunted – I didn’t see anything/anyone, but it had a very demonic feel to it both inside and out. That’s the only way I can describe it, and those who know me would know I wouldn’t say that lightly.

The hotel reception was on the 3rd floor of a rather run down building so we made our way up in the rather slow, creeky lift. The hotel (Super 8 by Wyndham) turned out to be situated right in the middle of Chinatown, set within a very run down, partly deserted chinese mall – and the reception was staffed solely by chinese employees. So after being checked in and given our room key, we made our way along a long labyrinth of dark, gloomy corridors and my mind is already thinking ‘if the fire alarms go off and we get evacuated in the middle of the night like we did in London last year I haven’t got a hope in hell of trying to find my way out of here again’. I was checking & double checking all of the exit signs.

Our room was right at the very back of the hotel, looking out on a car park and some rather run down buildings. The saving grace being able to see about the top 3ft of the CN Tower lit up in the far distance like some beacon of hope. (My mind was already not functioning rationally and I wanted to turn on my heels and get out of there) As you can see from the photos below however our tiny dark room looked nothing like the advertised one.

Don’t ask me WHY I had such a bad feeling about this place but I did. Call it instinct, but it had a such a dark & eery energy about it. Our room was not only small & dark it stunk of cigarettes even though it was supposed to be a non-smoking room.

I did think however that being in the middle of China Town that we would at least be able to find something good to eat as both Cam & I love chinese – wrong. I have had some great meals in China Town in London, but menus here were pretty much non-recognisable against Chinese menus we see in the U.K. Perhaps more ‘traditional’ chinese but just not a thing on a single menu that got my tastebuds active and certainly nothing that Cam would entertain. When I asked if they served prawn toast or chicken balls (Cam’s favourites) the server had to go and find a colleague to come and translate, said colleague came and shook her head and muttered “no, not on menu” We shared a bowl of steamed rice and walked back in the rain to our horrible dark & gloomy hotel room.

The next morning we venture out to find breakfast, we had already slept in quite late due the two hour time difference between Calgary and Toronto. We walked around Chinatown with Cameron looking at each food outlet saying “No – No – No” he was getting ‘hangry’ and so was I. I was also getting frustrated that I was in a place where I couldn’t feed my son. Eventually we found ‘Juicy chicken’ which looked OK and had chicken nuggets on the menu – HURRAH..until it arrived. It was ‘bits’ of chicken deep fried in something that looked like sawdust, brown grisly bits of chicken (actually I am not even sure it was chicken!!!!) but in all honesty I wouldn’t have given it to my dogs, so I couldn’t chastise my son for immediately turning his nose up. We returned once again to the hotel feeling miserable and grabbing a packet of crisps each from the vending machine for our breakfast.

Things did improve, we met up with our friend later, found our way to a different part of town, found some OK-ish food and had a good afternoon at the Roundhouse Train Museum and Ripley’s Aquarium (which I do have to say is one of the best aquariums I have ever been to).

I know I am not a city girl, I LOVE open spaces, oceans, mountains, forests and trees. I always tell people looking to visit the U.K that if you want to see real England then you have to ensure you step outside of London.

When I was in Downtown Toronto I could have been anywhere, it certainly didn’t feel in the slightest bit Canadian through and I came here to see Canada. I am sure there will be people who will say “ooh you should have visited…….” but to be honest my gut instinct told me to leave, so we did.

We took the Amtrak down to Niagara Falls, crossing the border into America. We had just booked into a Comfort Inn but my goodness what a difference. We arrived at the hotel at 11am, in all honesty not expecting a room to be available as I knew check-in wasn’t until 3pm. I had just wanted to drop our bags so we could go off an explore. The lady on reception could not have been lovelier though, she merged our two bookings and found is a room immediately, up on the top floor with a gorgeous view over the Niagara River. 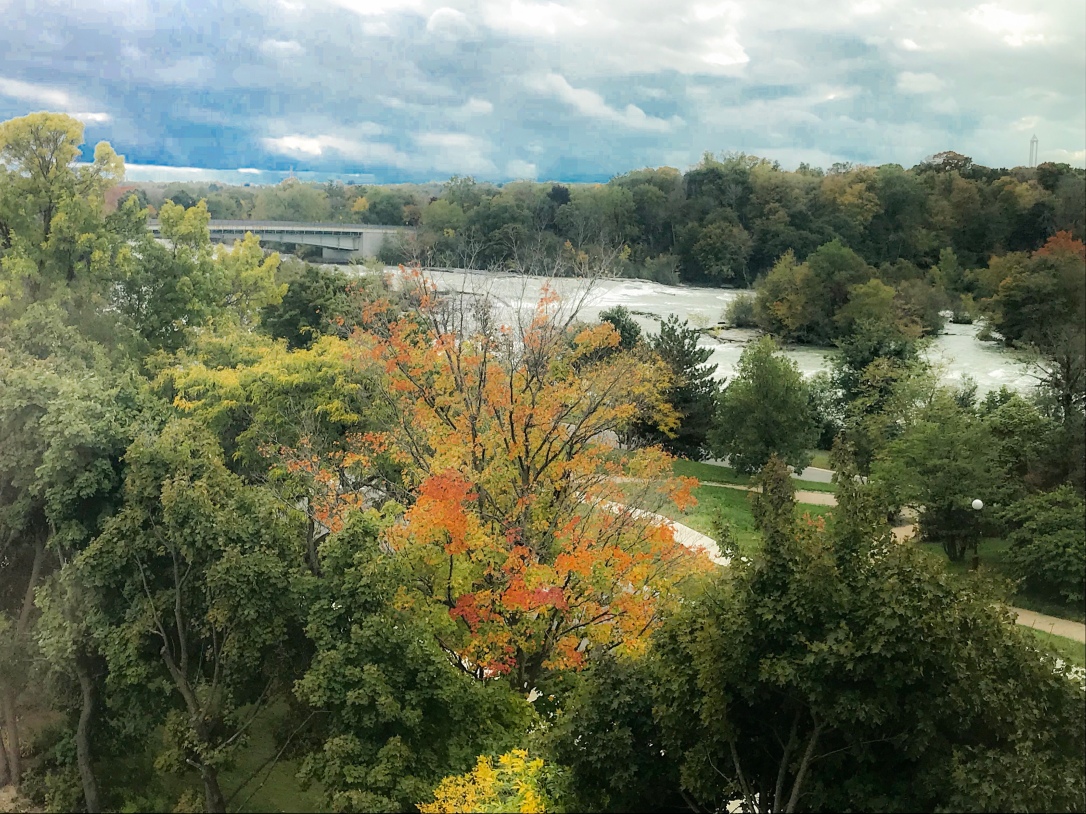 It’s just gorgeous here; open spaces, trees, the state park and of course Niagara Falls. We are just a few minutes walk away from the American Falls. I am happy once more – the anxiety is gone and I feel like I can breathe again. Cam can run and play as I wanted him to do on this trip, and he appears to have made friends with all the Squirrels in the park. 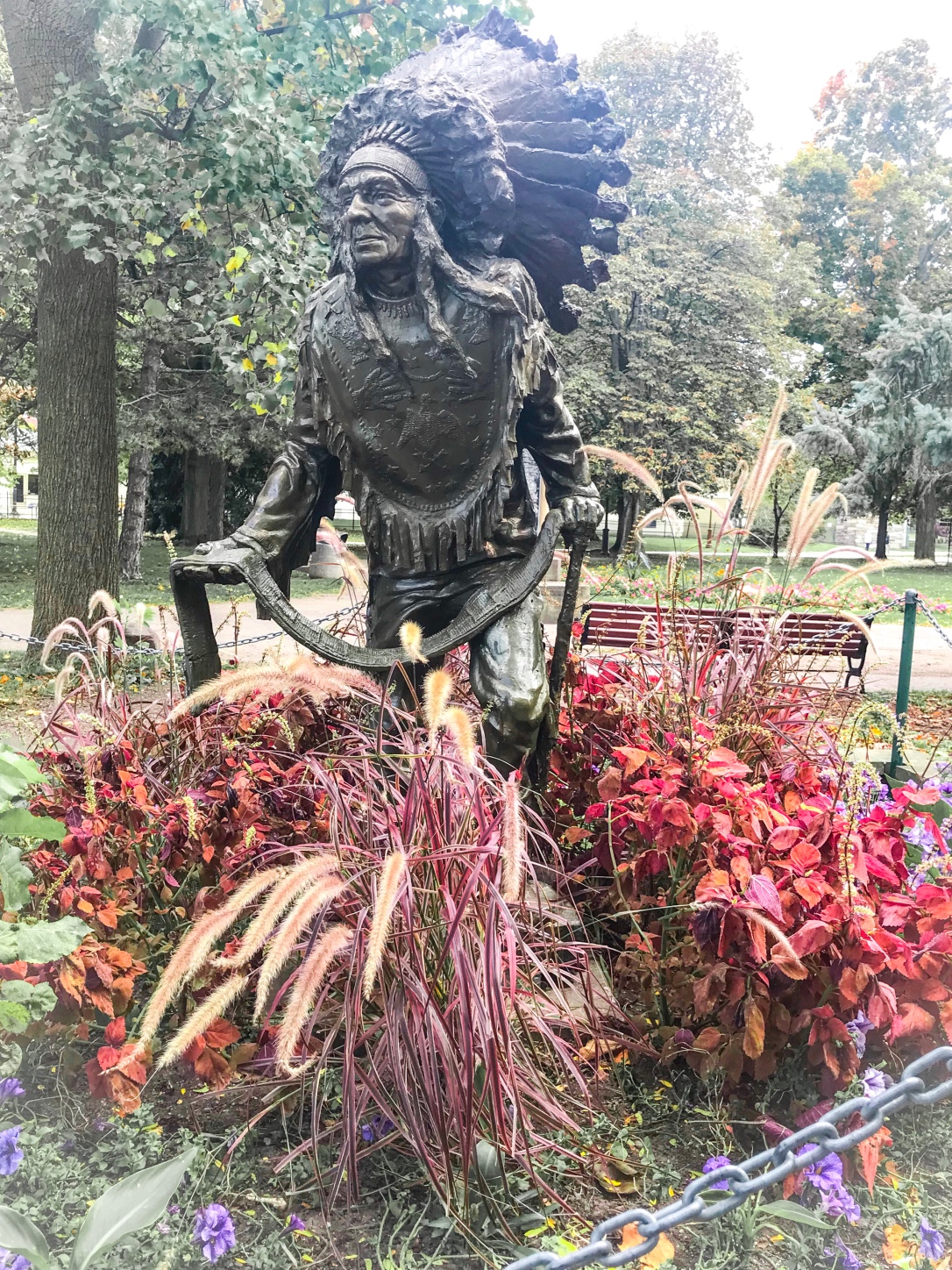 So I have had to stretch the budget that little bit further this week by having to pay out for a couple of extra nights here in Niagara, but I don’t regret it one bit.

I can’t pin point exactly what made me run from Toronto, but I am glad we did. Over the years I have learnt to always trust my intuition and I guess I just have to accept that in travelling around the world we are never going to love it everywhere!