As this trip draws towards a close it is hard to believe that we have packed so much into just two weeks. It has been both exhilarating and exhausting at the same time (remembering that I am reviewing this as a single mother travelling with a 7 yr old, having to have eyes at the back of my head and having to carry virtually all of his luggage as well as my own).

Firstly a huge thank you to Neil at Iglu cruises who was very patient with me in the booking process with lots of questions, upgrades & add ons etc, but he was very helpful and almost felt like an old friend by the time I booked as I had spoken to him so many times! We have two more cruises booked this year – sadly Iglu were unable to match Cruise 118 for price which I was actually quite disappointed about because their service is second to none and I would have like to have given them the business. I would still however highly recommend them as the package they put together for me was excellent and extremely good value for money.

The first week of the trip Chicago to Memphis and New Orleans by Amtrak rail was a lot of fun, but it was tiring! In hindsight I would definitely have extended the trip to have spent longer in each city. That said I appreciate the package was really put together for those perhaps only having a fortnight off work, not those doing the longer term travel as we are. We flew British Airways World Traveller Plus (Premium Economy) from London Heathrow to Chicago, I am a regular B.A. flyer and as always the flight was trouble free from start to finish. It was an added bonus to discover that B.A. now serve champagne on boarding with World Traveller Plus class which puts them on a more even keel with Virgin Atlantics Premium Economy. The transfers we requested all ran very smoothly and each time we were transported in luxury vehicles with friendly and courteous drivers (again in hindsight we could have probably cut down on cost by not pre-booking the transfers and using taxis or uber, but I can’t fault the service of what we had).

Our hotels in Chicago, Memphis and New Orleans were each fantastic. The Hotel Centric Magnificent in Chicago and the Double Tree on Canal St in New Orleans could not have been more central to everything. The Guest House at Graceland (which we LOVED) was situated away from the main downtown area of Memphis but as the name suggests was located right next door to Graceland itself. Even though it would be an easy walk to visit Graceland the hotel still supply a free shuttle bus which runs every 30 mins.

Our connections between the cities were all done via rail on Amtrak’s ‘City of New Orleans’ Route. Trip 1 was on the overnight sleeper train from Chicago to Memphis, we upgraded from the roomette to sleeper compartment and were very glad of this for the additional space, private toilet & shower room. My son loved this as part of the over all adventure but the carriage was a little cold and amtrak only provided a thin sheet for the night (in December) no blankets. As a result we slept with our coats over us.

As I have mentioned in a previous blog is what the travel agents won’t tell you is that the trains have to sound their horn at EVERY road crossing along the route, and trust me there was a lot!. 10 hours of trying to sleep with the darn horn sounding every few minutes when you are in the front coach was NOT fun!! Still we enjoyed the adventure and we will be talking about it for many years to come.

The other thing to be aware of if you are thinking of making this trip is the check out and check in times between hotels. You have to officially check out of your Chicago hotel at 12noon, the train is not until 8pm. It arrives into Memphis at 6.30am and the check in time in the Memphis hotel is not until 2pm. Thankfully for us both hotels were very accommodating and gave us a late and an early check in. This may have been because they took pity on me travelling alone with a child – others may not be so lucky and hence could leave you well over 24 hrs between hotel changes.

The second part of the rail journey is Memphis to Chicago, it is an early start as you get on the same train route you left 48 hrs earlier which departs Memphis at 6.30am, and arrives into New Orleans around 3.30pm 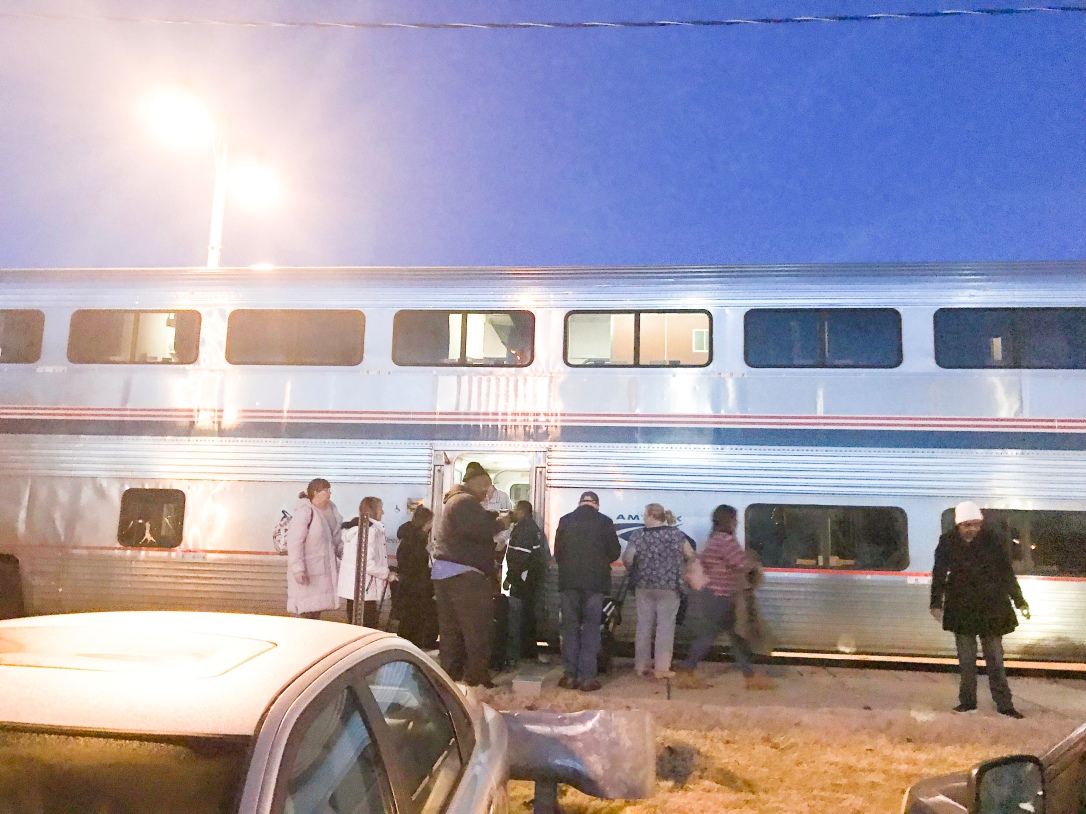 It was a lot less touristy than I had imagined and I think not only were we the only English people in the train, we were the virtually the only white people too, not that that was a problem to us whatsoever, the whole part of our travelling is to experience new people and cultures so it was actually quite fun boarding the train with the ‘locals’ rather than a load of tourists. We had a roomette for the 9 hr journey and we were glad of some privacy for the time, it also gave my son a chance to catch up on some overdue sleep as he was pretty exhausted by this time. I kind of wish we had travelled in coach class though because when we walked through it was like one long party going on with singing, chatter and card games. Maybe it wouldn’t be for everyone, and yes it was pretty noisy but what an atmosphere, those guys certainly know how to enjoy life!!!!

New Orleans was just an amazing city. Many people have told me there is a high crime rate there and I’m not doubting that, but I have to say everyone we met there was happy, friendly & welcoming and I truly wish we had more than just one full day to explore there as there was so much more I would have liked to have seen and done. We only managed a whistle stop tour on the city sighting bus and a trip to the aquarium – both of which were fabulous. The highlight of us however was the magical ride on the Polar Express out of Union Station. If you are ever visiting New Orleans at Christmas with young children then this is a must! I have written a separate blog about this trip in more detail.

Then it was on to part 2 of the trip, a 7 night Caribbean Cruise from New Orleans on the Carnival Dream. This was my first cruise with Carnival line, but having previously cruised with Celebrity, Royal Caribbean, P&O and MSC I have to say that Carnival comes bottom of the list. Don’t get me wrong we did have an amazing time but Carnival Dream just lacked the ‘it’ factor and the ship felt a little old and tired. Our balcony cabin was very spacious although the balcony itself much smaller than any other ship I have cruised on (and I always book a balcony).

Boarding was very straightforward, we were given an arrival time of between 12.00-12.30pm and were on board the ship within 30 minutes of arriving at the port. However wherever we went on the ship from start to finish it seemed very over crowded. The main restaurants lacked any kind of grandeur like those of its competitors do, they were more like giant diners with guests crammed in like cattle. The servers clearly overstretched and were getting many orders mixed up. We only ate in the main restaurant on Christmas Eve and Christmas Day and on both occasions we waited over an hour for our meals to come up which were tepid and flavourless. We witnessed other guests on tables surrounding us being served the wrong meals and on one occasion a table of 6 being brought their main course before they had been served their starters.

We ate in the upper buffet the remainder of the time which was a lot more convenient and relaxed with a young child, but unlike other cruise lines I have sailed with the buffet was very bland, limited and repetitive. The wifi was also appalling, I initially paid around $50 for the week for the basic service, but then paid an additional $35 for the upgraded service. It was awful, I ended up paying for data roaming when we were in port because I couldn’t even upload basic word documents and photos whilst at sea and it took me all day to download a 14 second whatsapp video that my parents sent me on Christmas Day. It would be bad enough if it was a free service, but having paid over $80 to use it and then not being able to fully keep my business communications up to date was a big negative for me as wifi is critical to me whilst travelling. I have to say on this occasion I was glad to be only spending 7 nights on this ship.

Our excursions were all fantastic, we did a catamaran & snorkel trip in Jamaica, swam with sting rays and visited a sea turtle farm in Grand Cayman and we swam with Dolphins in Cozumel, Mexico. All were incredible and unforgettable experiences which the tour operators manage fantastically given the number of ships in port (there were 3 tendered in Grand Cayman and 7 in port in Cozumel) It is Christmas week and obviously winter is peak cruise season in the Caribbean but there were SO many boats & people at Sting Ray city and so many people at the dolphinarium that as wonderful as it was to be up close and personal with these incredible creatures and seeing my son wide eyed and excited, I also felt guilty about participating in the tourism conveyor belt which these animals are experiencing day in, day out. I understand why some would highly criticise such but it’s not until you are actually there and among it all you realise the stress and anxiety these animals are put through to keep tourists happy (yes that includes us).

My criticisms in my review are probably just me being ultra picky because all in all we have had the most incredible holiday. We have made memories which will stay with me for the rest of my life. I only hope that age 7 that Cameron will remember all of it too. I probably overshare on social media but purely to preserve the moments for us both to look back on one day with many, many cherished memories. 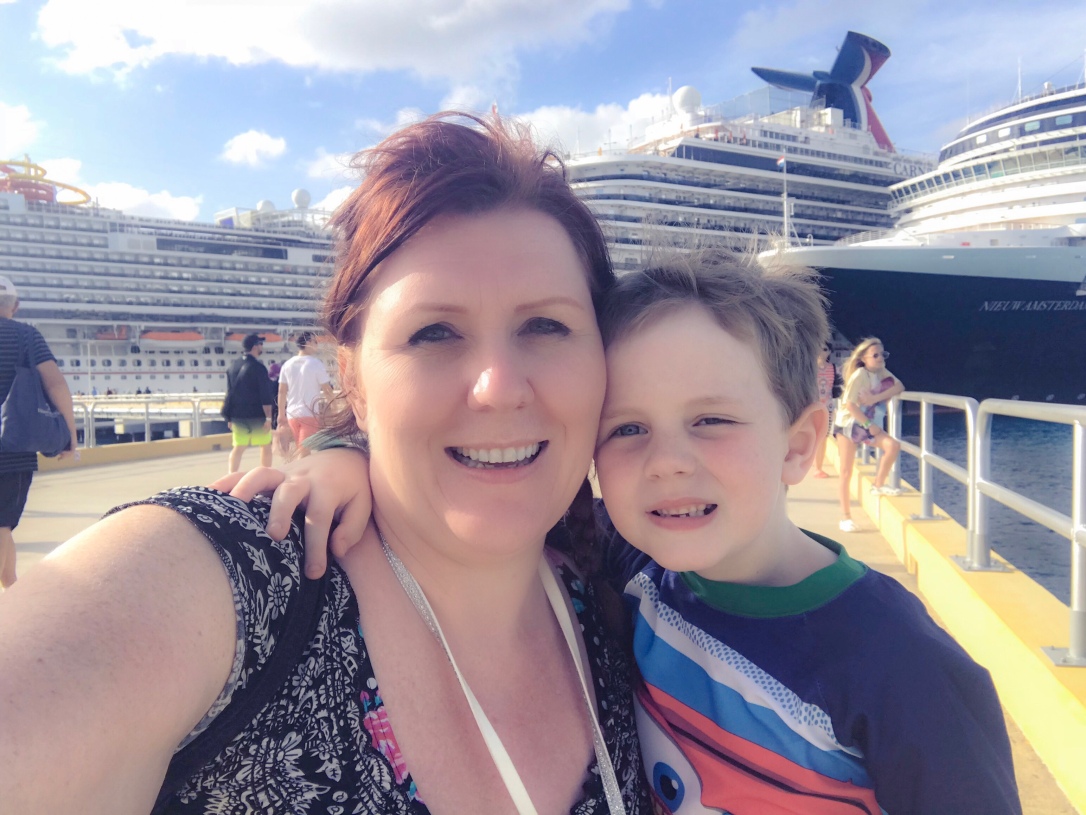