Serious safety breaches on board The Carnival Dream Cruise Ship. 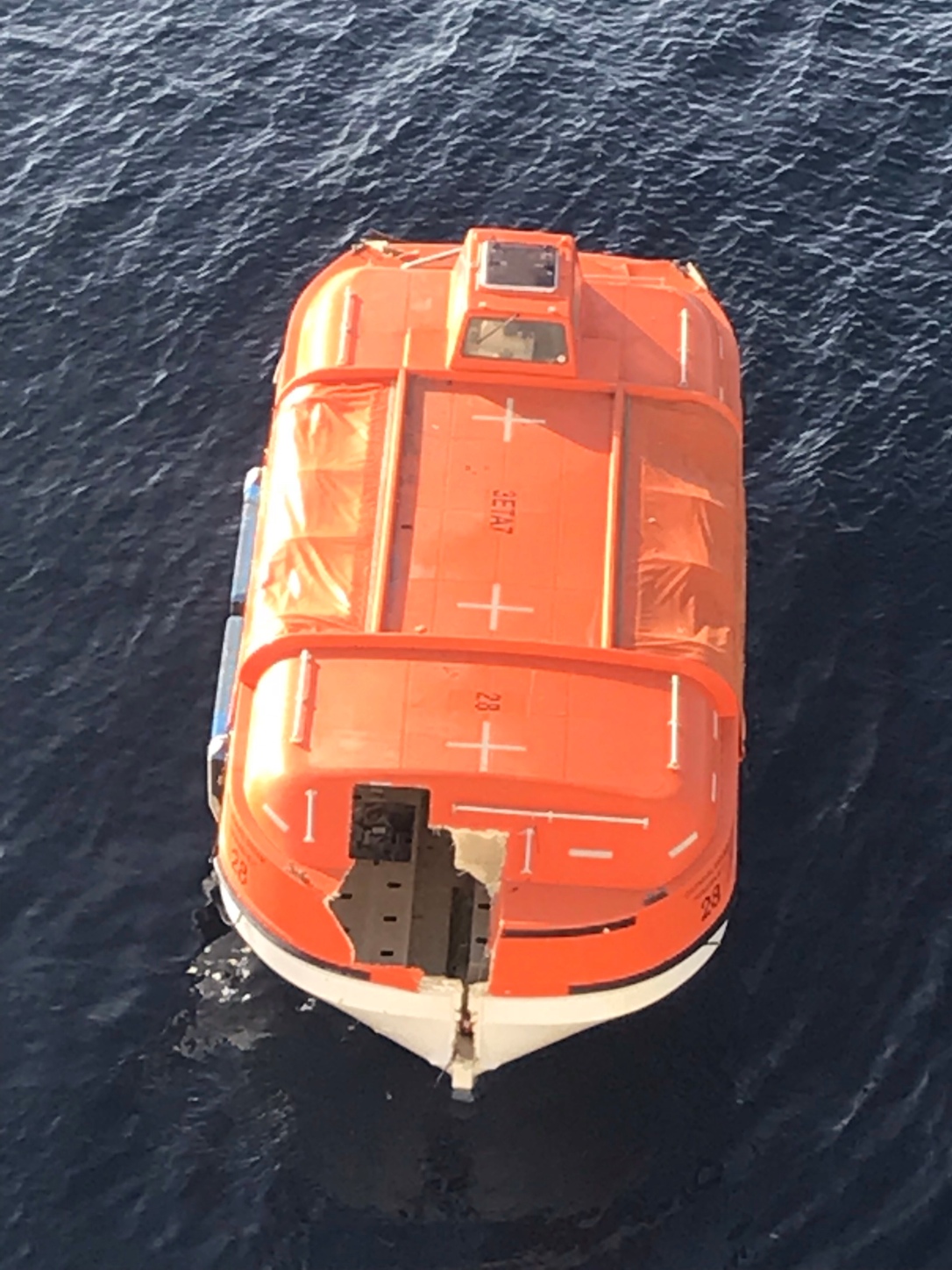 It’s hard to believe possible but today the Carnival Dream cruise ship lost a lifeboat in the middle of the Gulf of Mexico whilst sailing on a packed Christmas holiday cruise with c.4500 passengers & crew on board.

The lifeboat apparently literally sheered off from its fixed berth position and fell into the sea. If there is one good thing to be thankful for it is the fact that the design of this ship means that the lifeboats overhang the sea and are not overhanging decks as they do on many cruise ships otherwise the result of such an incident with passengers walking around the decks could have been unthinkable.

I, like many passengers didn’t see the lifeboat fall as at the time I was inside our cabin with my son, but somewhere around 2pm the ship started to circle back on itself and slowed right down to a stop. With a lifeboat spotted in the centre of the circle of wash and the crew spotted up on the bridge with binoculars many passengers quickly started speculating that we had a ‘man overboard’ and many were quickly on balcony and deck on the port side of the ship looking out for any sign of life in the water. 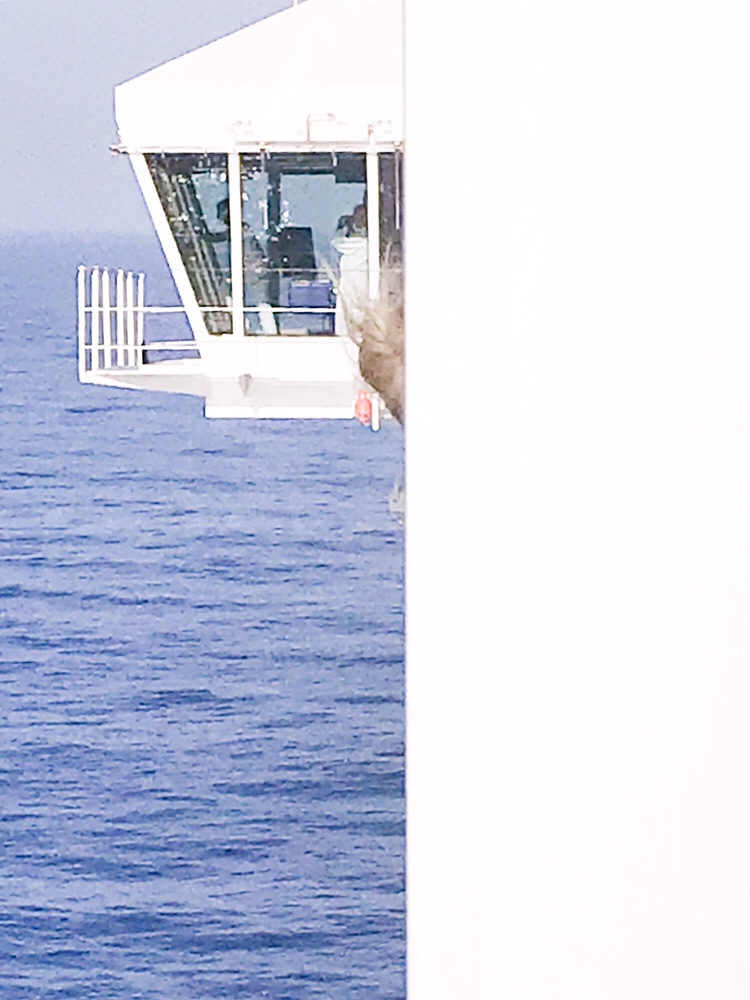 As the ship edged closer to the lifeboat the damage to it both at the front and back became evident for all to see and it was at this stage that it was a case of lifeboat overboard rather than a person (thankfully).

The ship got up close, only to then see the unmanned lifeboat float away again.

At this stage the first official passenger announcement was made that the ship had been stopped due to an ‘incident’ but that all passengers were safe and there was nothing to worry about.

Thankfully the water was incredibly calm and after a while a second lifeboat was launched with crew on board – one wielding a long stick which was used to pull the stray lifeboat along side and 3 crew members were transferred aboard to the sounds of cheers from the growing audience of passengers. 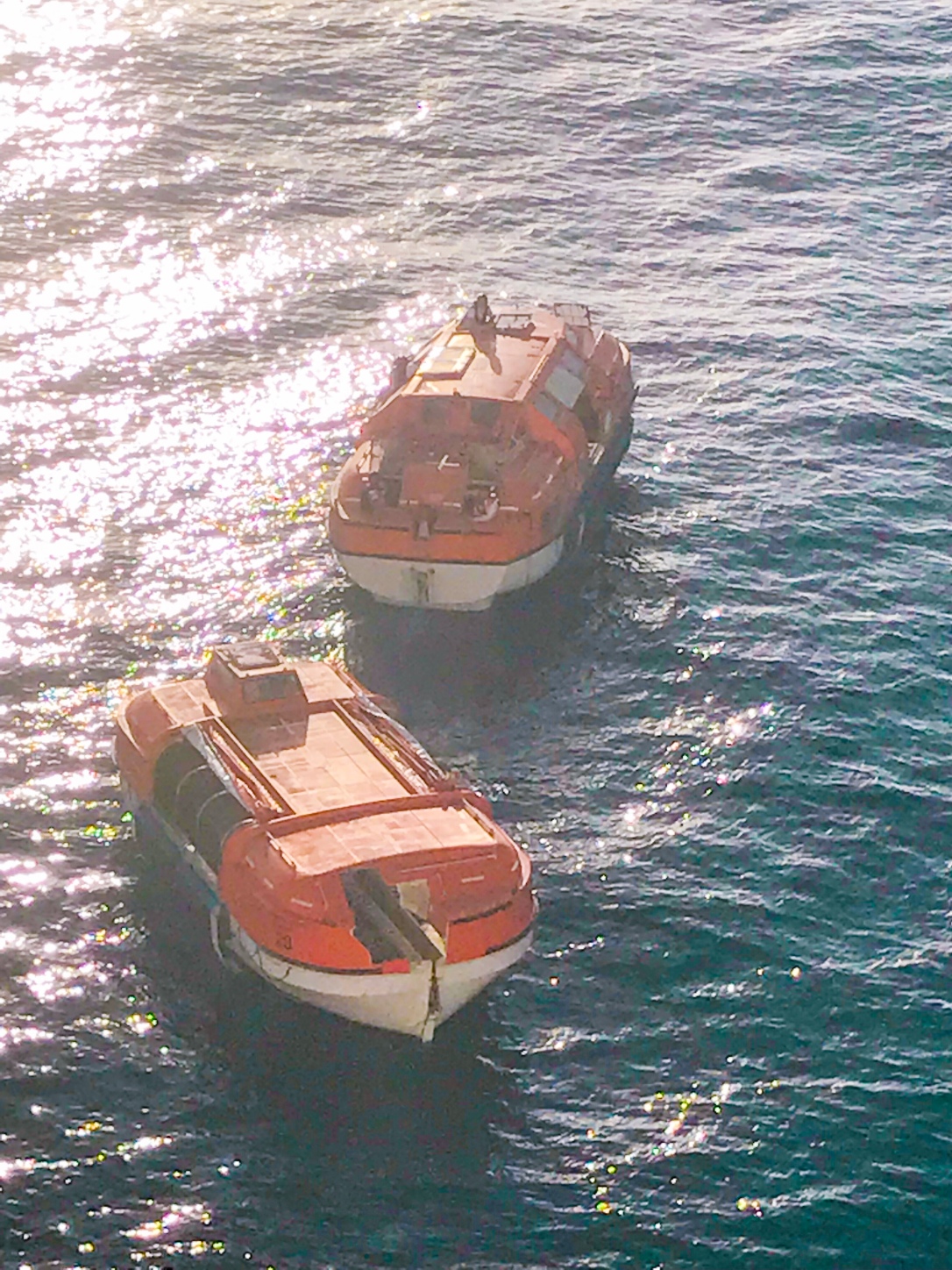 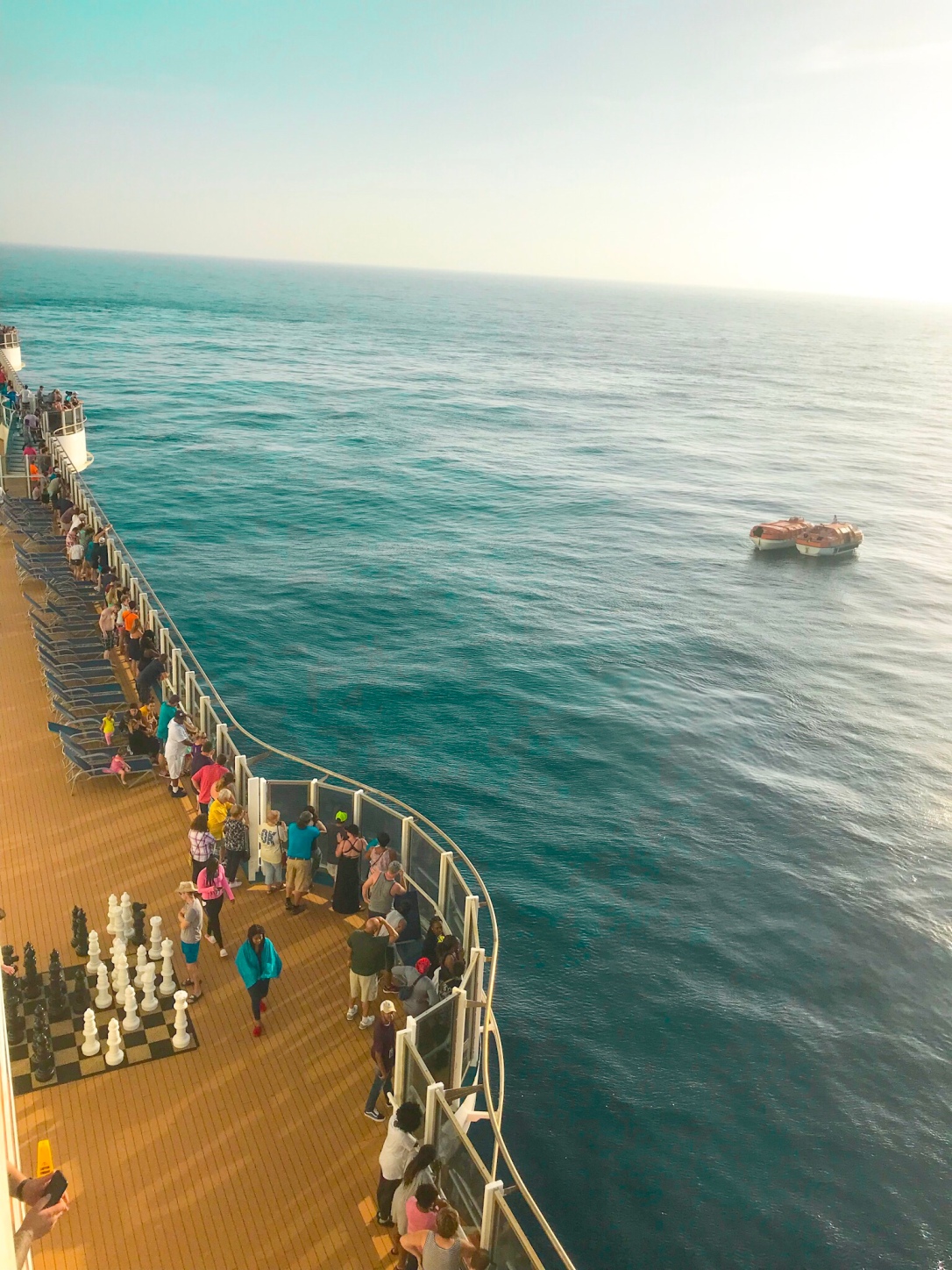 The engines were started up on the stricken craft and it slowly made its way back towards the ship. We thought that would be the end of the drama, but alas no – with its fixings sheered off there was no way of raising it back onto the ship!!! They appeared to try and try without success. After an hour or so both vessels appeared to slowly make their way towards the rear of the ship, so I don’t know at this stage if they were considering towing it back but either way I guess it was an idea that was abandoned. Announcements came over the tannoy from both the Captain and Cruise Director saying they would update when they could. I felt for the Captain and the decisions he has to make under such circumstances – do you leave the lifeboat floating adrift and a risk to other ships, do you continue your passage now knowing you do not have enough lifeboats to save all of your passengers? That, along with 101 other questions I am sure were having to be asked.

After a total of just under 4 hrs, the light was fading and we were finally under way again. The Captains final announcement saying they had left the stricken lifeboat behind, to be picked up later by another ship (? coastguard). I guess it’s position is accurately recorded but I don’t know whether it was left with crew onboard or not. If it was then it must be pretty scary for them out in the darkness in a seriously damaged boat which appeared to be taking on water, or was it left unattended and drifting out of control?

Either way the question has to be asked – how can a lifeboat just fall off a modern day cruise ship in perfectly calm seas?

I wrote in my blog just yesterday that I wasn’t over impressed with my first Carnival Cruise, the ship looks old and tired but clearly has some serious maintenance and safety issues. It’s just a relief that no one was killed or injured as a result.

So tonight we are sailing back towards New Orleans with one lifeboat short, that’s seating for 150 passengers, but if an empty lifeboat can fall from its fixing, what’s the chances of one falling in an evacuation when having the weight of 150 passengers boarding – it doesn’t bear thinking about.

This will definitely be my first and last cruise aboard Carnival Cruises, they very clearly have some major safety issues and I write this blog to make others aware. The Carnival Dream could quickly become the Carnival Nightmare. I shall just go to sleep tonight with a little reassurance that Cameron and I might at least stand a chance of getting a seat in a lifeboat if the ‘women & children first’ rule still applies?

Since initially writing this blog on the day of the incident I have been told (unofficially) by several people that the lifeboat fell because a teenager passenger accessed the winch and released one end of the lifeboat which in turn led to it being damaged and falling into the sea. Maybe slightly reassuring from the ship’s maintenance perspective, but still raises a major safety & security issue of how a teenager was able to so easily access a restricted crew area causing what I can only assume is $100,000’s of damage & expense and endangering lives of passengers at sea?

Leave a Reply to Dave A Cancel reply