Excursion review of the original ‘Home & Away’ tour to ‘Summer Bay’

Although I in fact watch very little T.V. I do have to confess that my daily dose of the Australian soap opera ‘Home & Away’ is my guilty secret! I have watched it from the very first episode, which I now discover was a staggering 32 years ago.

If you are a fan of the soap then you will love this tour, but even if you have never watched an episode in your life then I would still highly recommend it as the location is truly something special.

Summer Bay is actually a fictional town within the show, the beach and bay scenes are in fact filmed in a place called ‘Palm Beach’ in the northern beaches region of Sydney, Australia. 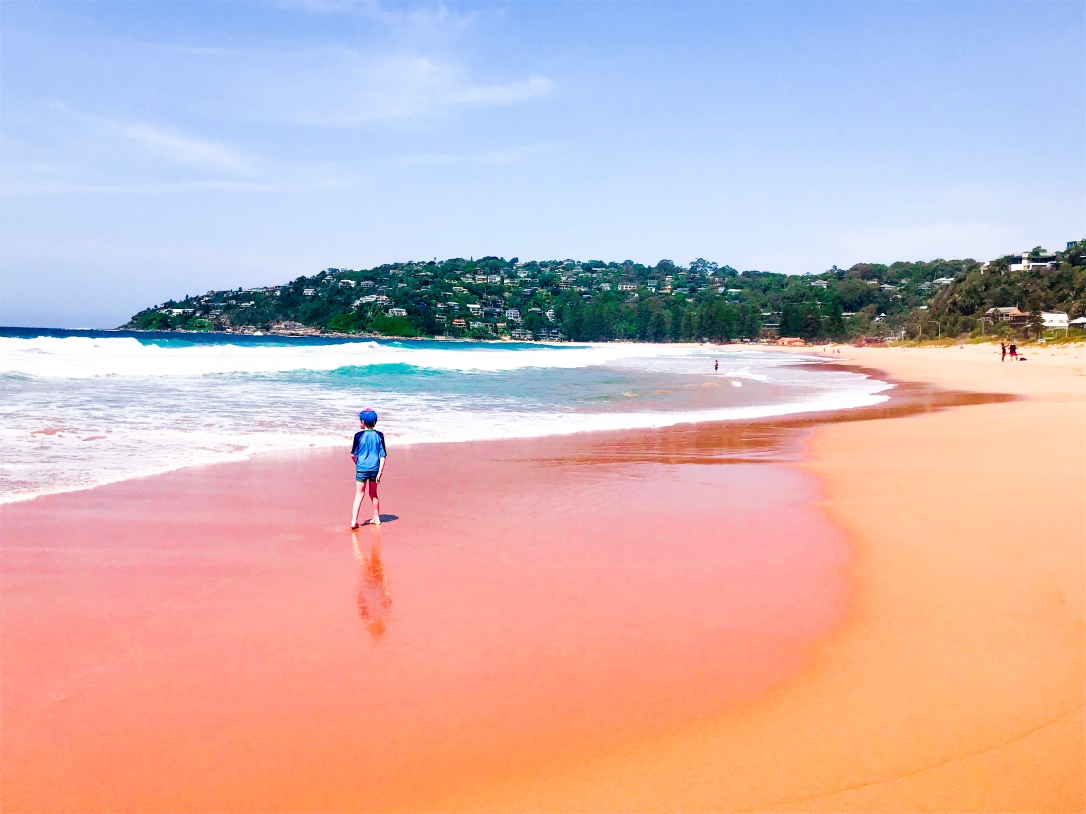 Palm Beach – better known to many as Summer Bay

Our tour started at 9am when we were collected from Circular Quay by our lovely tour guide Ross. Surprisingly Cameron and I were the only people on the tour that day so Ross drove us by car instead of the bus which he normally uses for larger groups.

This tour usually includes a stop on the way for morning tea, however as we were the only ones on the tour Ross asked us if we would rather skip the tea and have more time at the Bay as he knew they were filming up there that day, and we were more than happy to do this.

Palm Beach is around 43km from Circular Quay so we headed out over the iconic Sydney Harbour Bridge and out towards the Northern Suburbs towards our destination which took around 90 minutes as Ross took the lovely scenic route along the Northern beaches through some very pretty villages and spectacular ocean views. 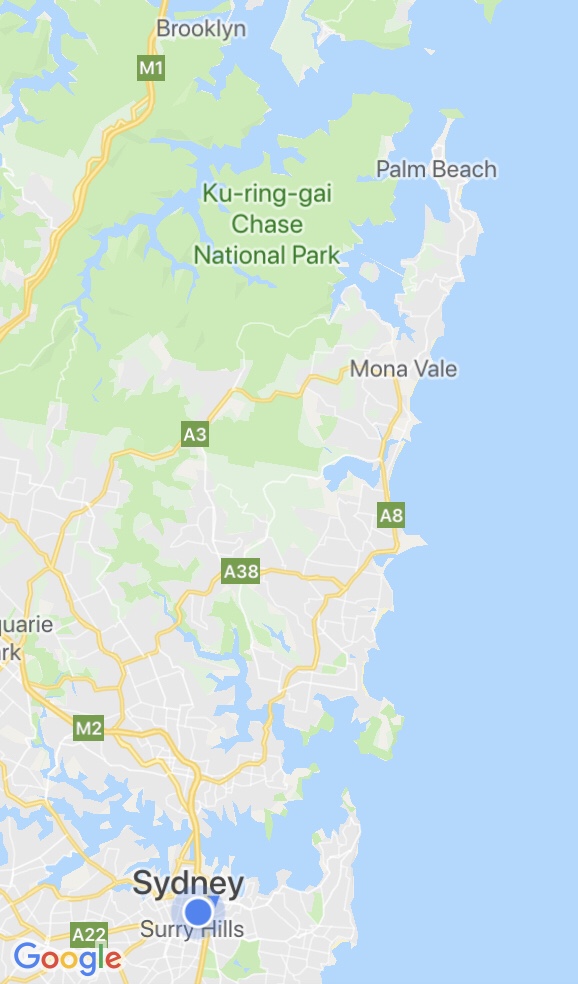 Ross was a wealth of information and told us lots about Home & Away on the drive up. I was actually surprised that so much of the action does not actually at the Bay itself but is filmed at 200 different locations in and around Sydney, with the Caravan Park being some 3hr drive away!

As we drove into Palm Beach Ross gave us a tour around pointing out the surf club, the beach and grass headland and bench where many scenes are shot. 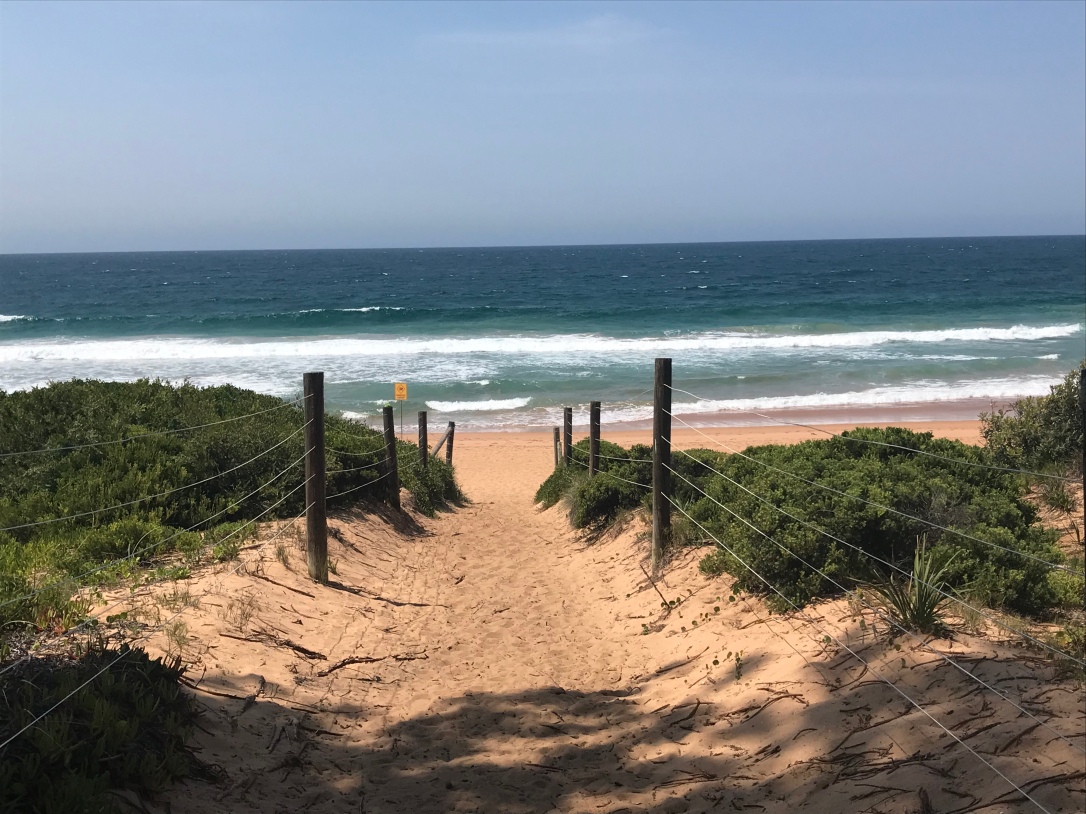 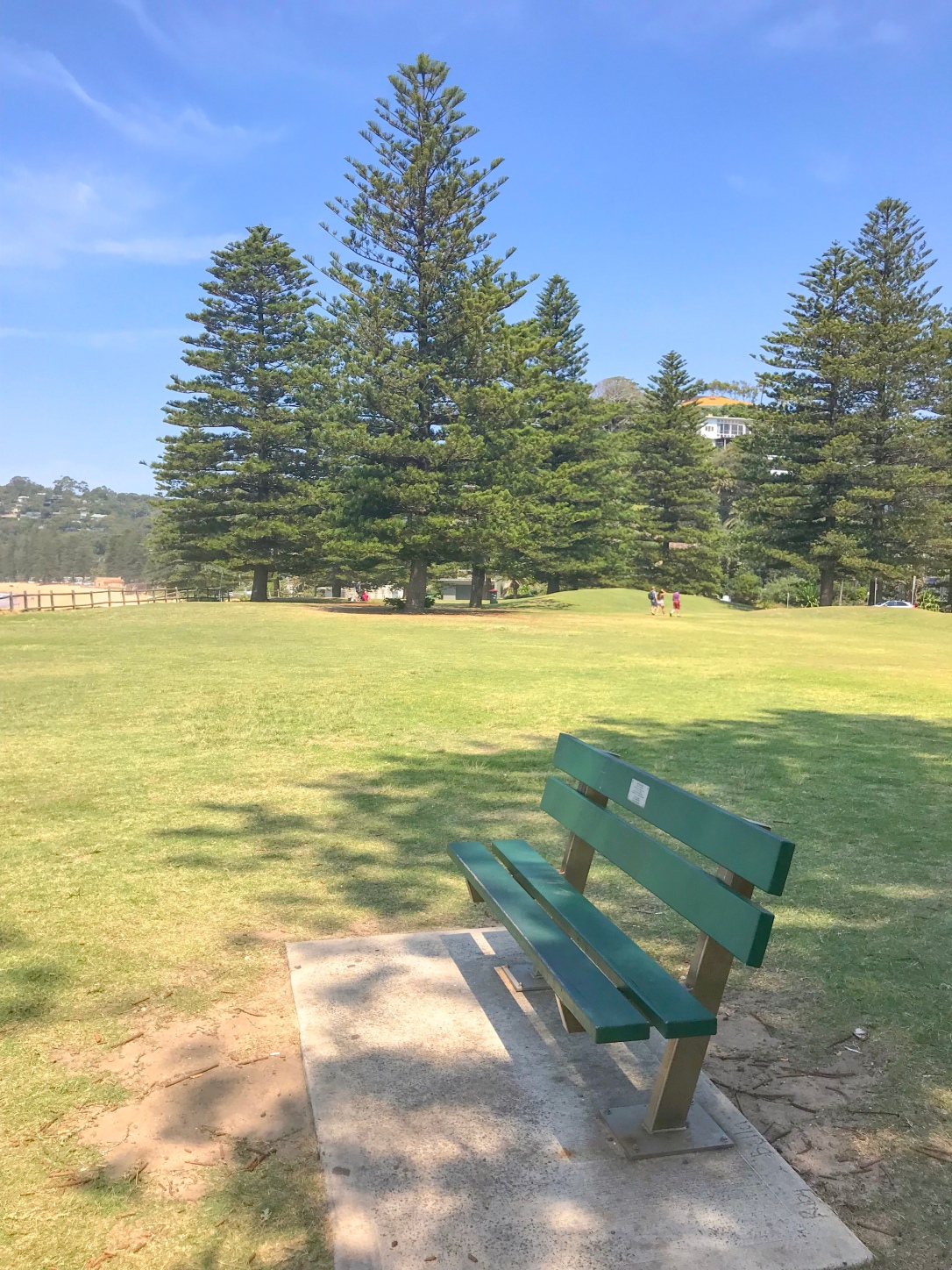 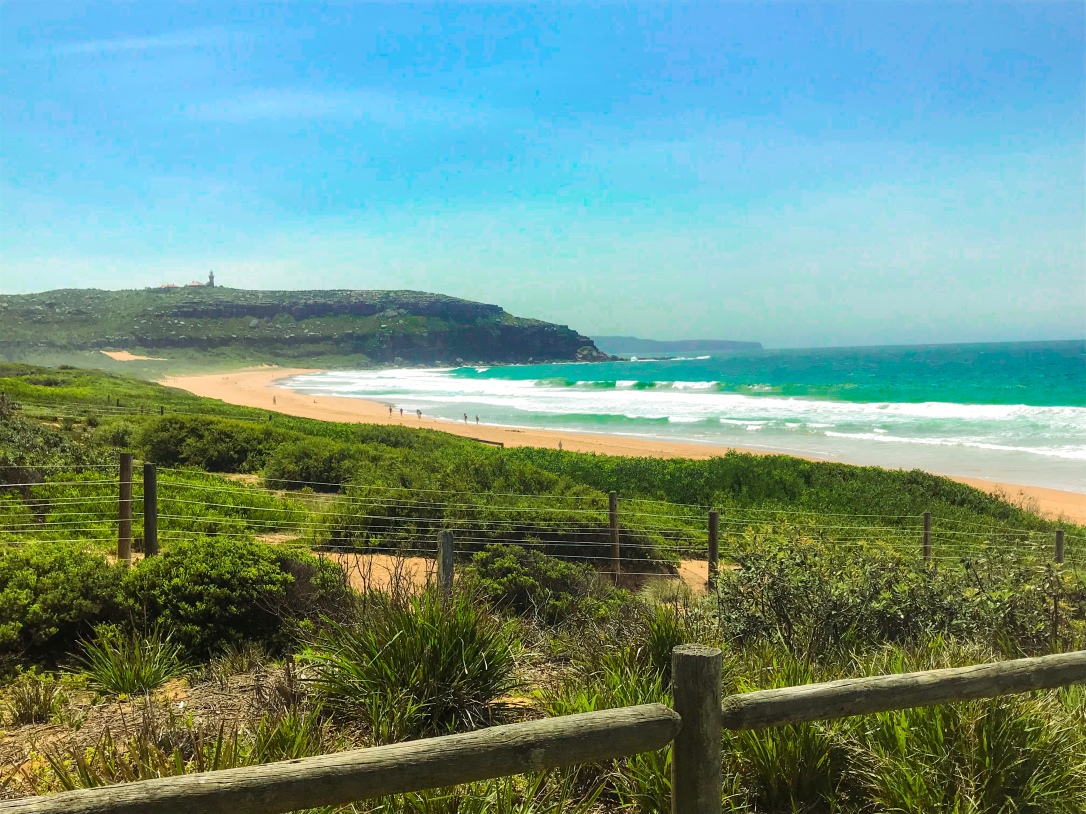 The beach really has to be seen to be believed, the T.V does not come close to showing its true beauty or really doing it justice. Stunning turquoise waters, with strong surf set against the contrasting golden sand, and as the waves crash over it the sand turns to such a such a deep red colour that you may think it was shipped in directly from Ayres Rock! 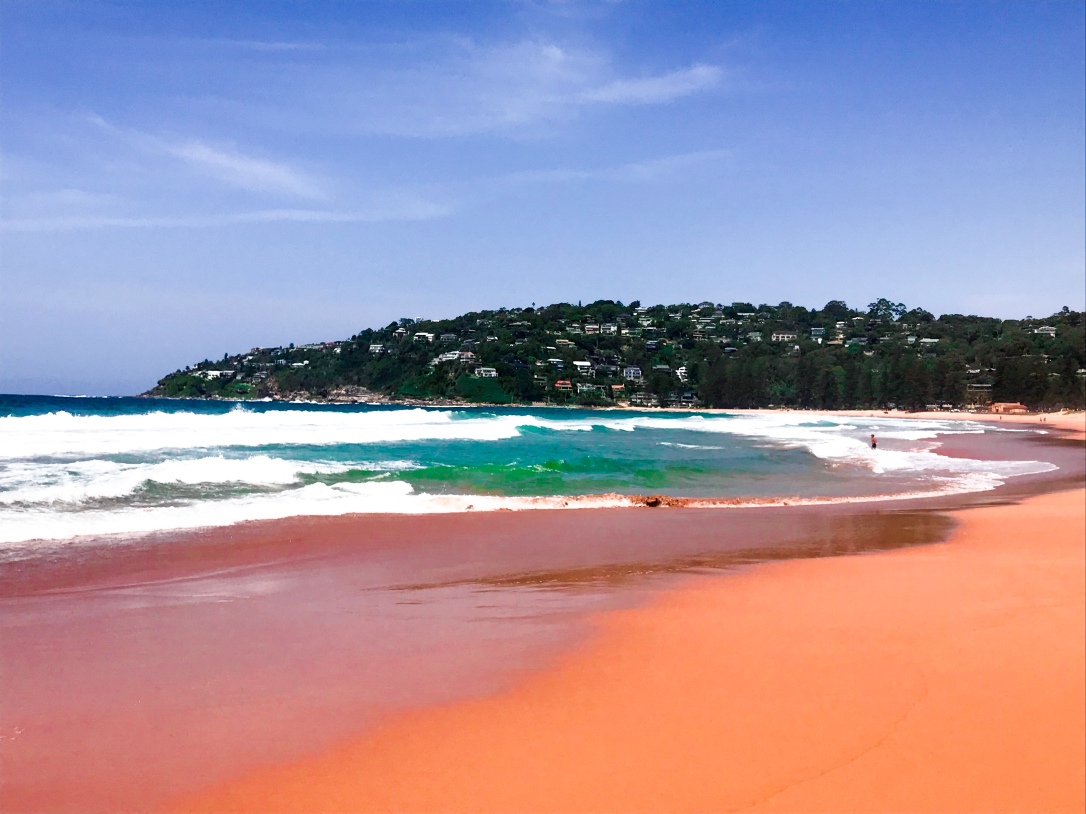 Whilst one side of the beach is spectacular but also rough, once you get round the other side of Barronjoey head (or a quick walk from one side of the peninsula to the other) you are in ‘the bay’. Here the water is much calmer and views are breathtaking as you look across to Ku-ring-gai chase national park.

You can sit on the shore and look at the little boats, or watch the seaplanes as they take off and touch down right in front of your eyes. 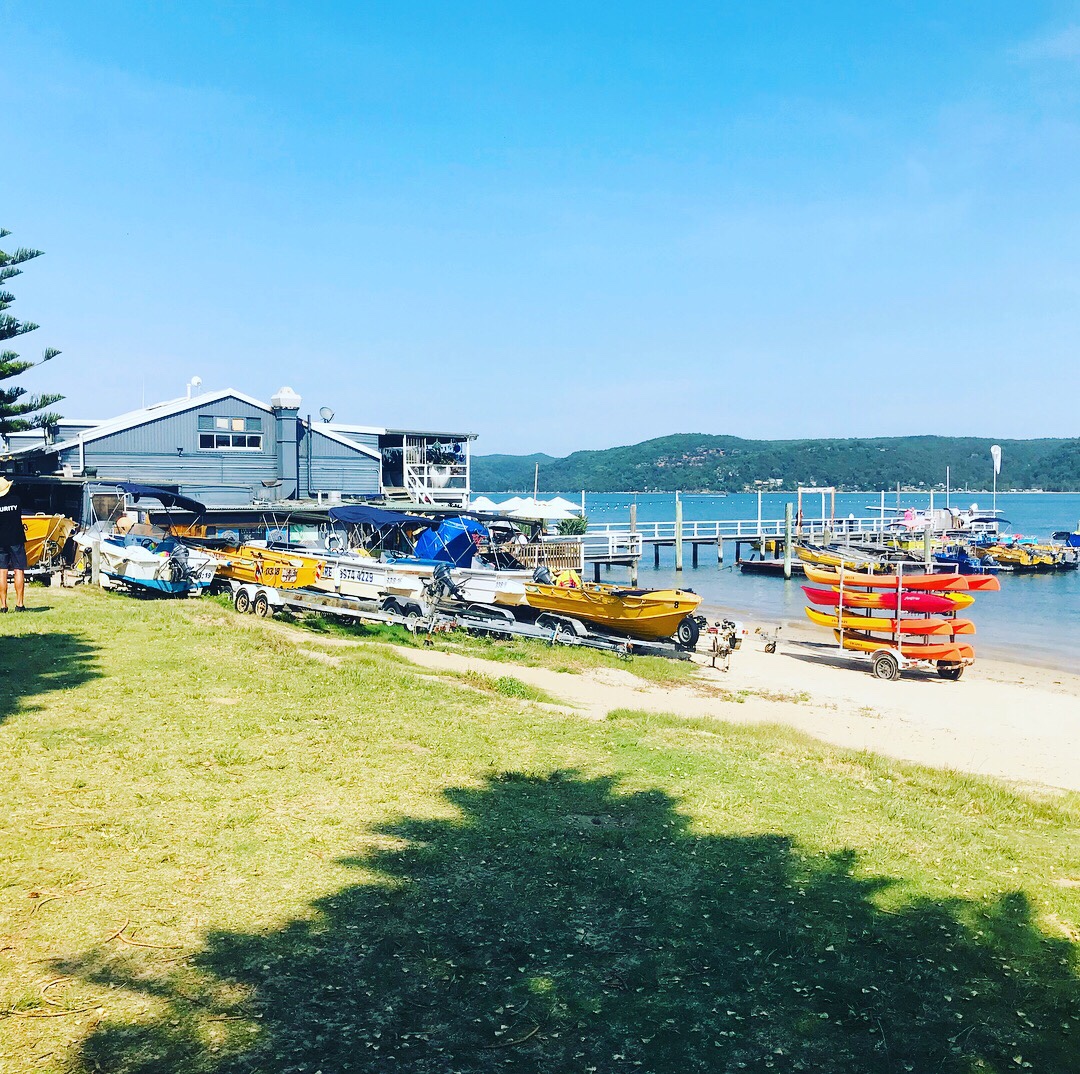 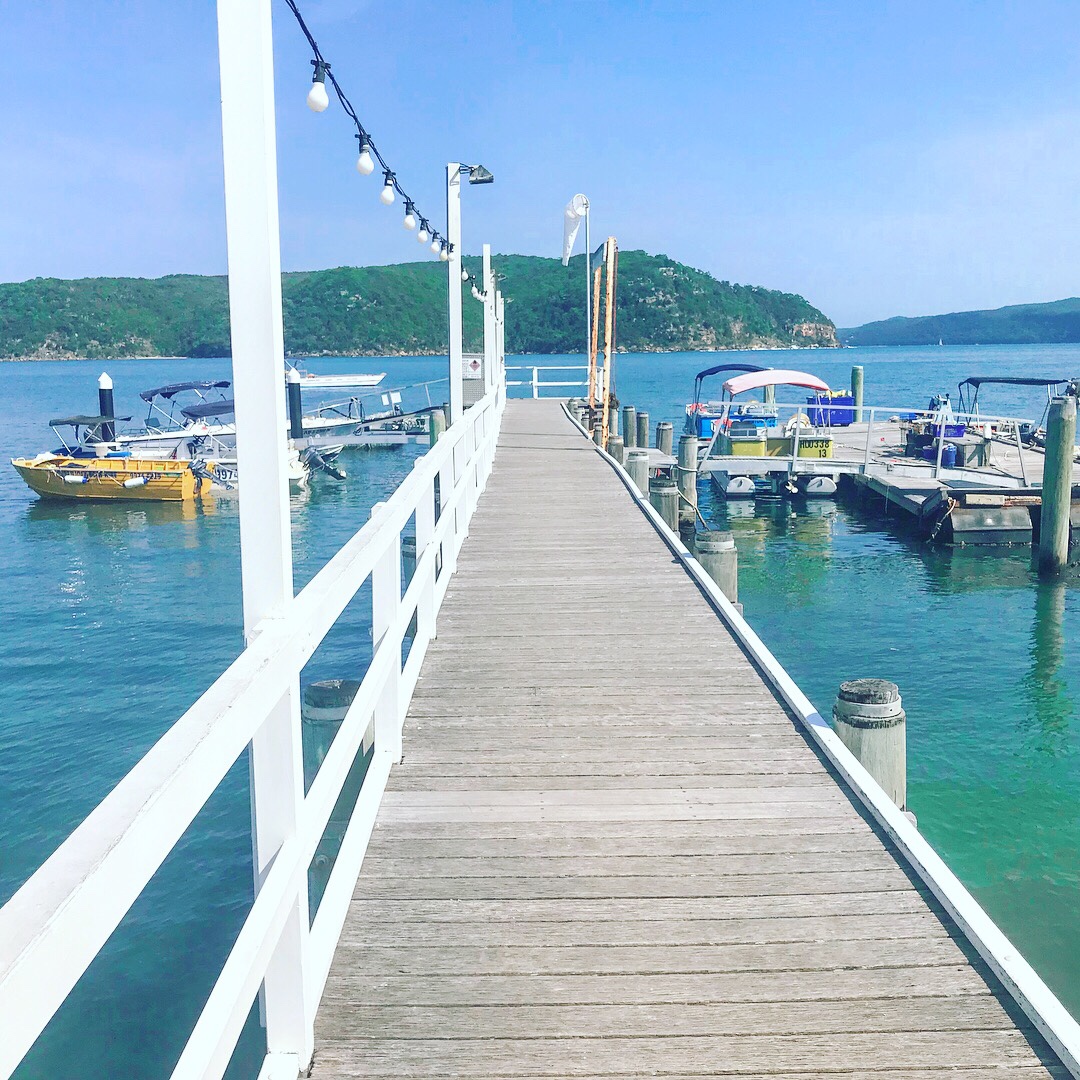 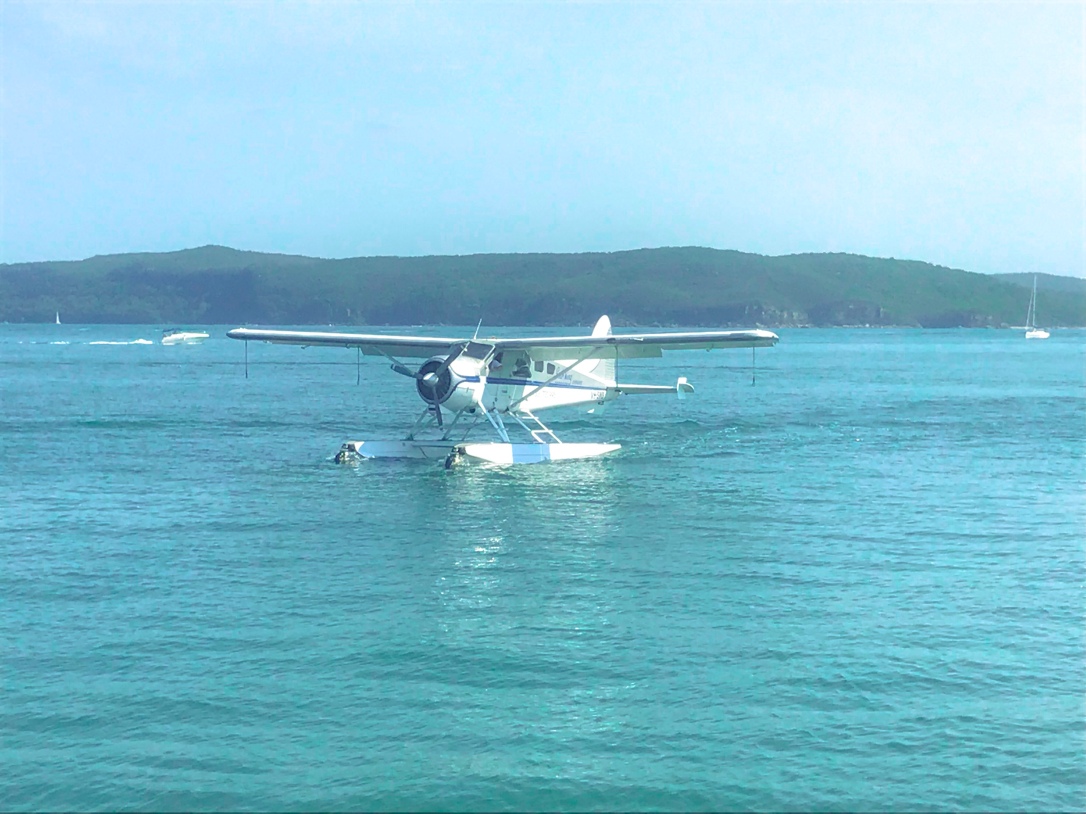 On the day we visited there was a lot of filming action around Alf’s bait shop and the outside of the diner. We managed to catch a glimpse of the actresses who play Marilyn, Irene and Roo, as well as a couple of others I didn’t recognise as I haven’t been able to keep up with the show this last year while we’ve been travelling.

There is a real diner at the bay where you can sit and watch the world go by, but it is not ‘the’ diner where the inside scenes are filmed.

We didn’t get too close to the filming as I didn’t trust Cameron not to shout out something random in the background!!!! But we watched from a comfortable distance and had a swim in the calm waters of the bay which was surprisingly quiet.

After this Ross prepared a picnic lunch for us in a more shaded area, just a few yards away from where the cast were also enjoying their lunch break too. (Ross times your lunch with theirs so that you maximise your time watching the filming when it’s on). We were fortunate enough to also share our lunch break with some young kookaburras which Cam and I found very exciting. 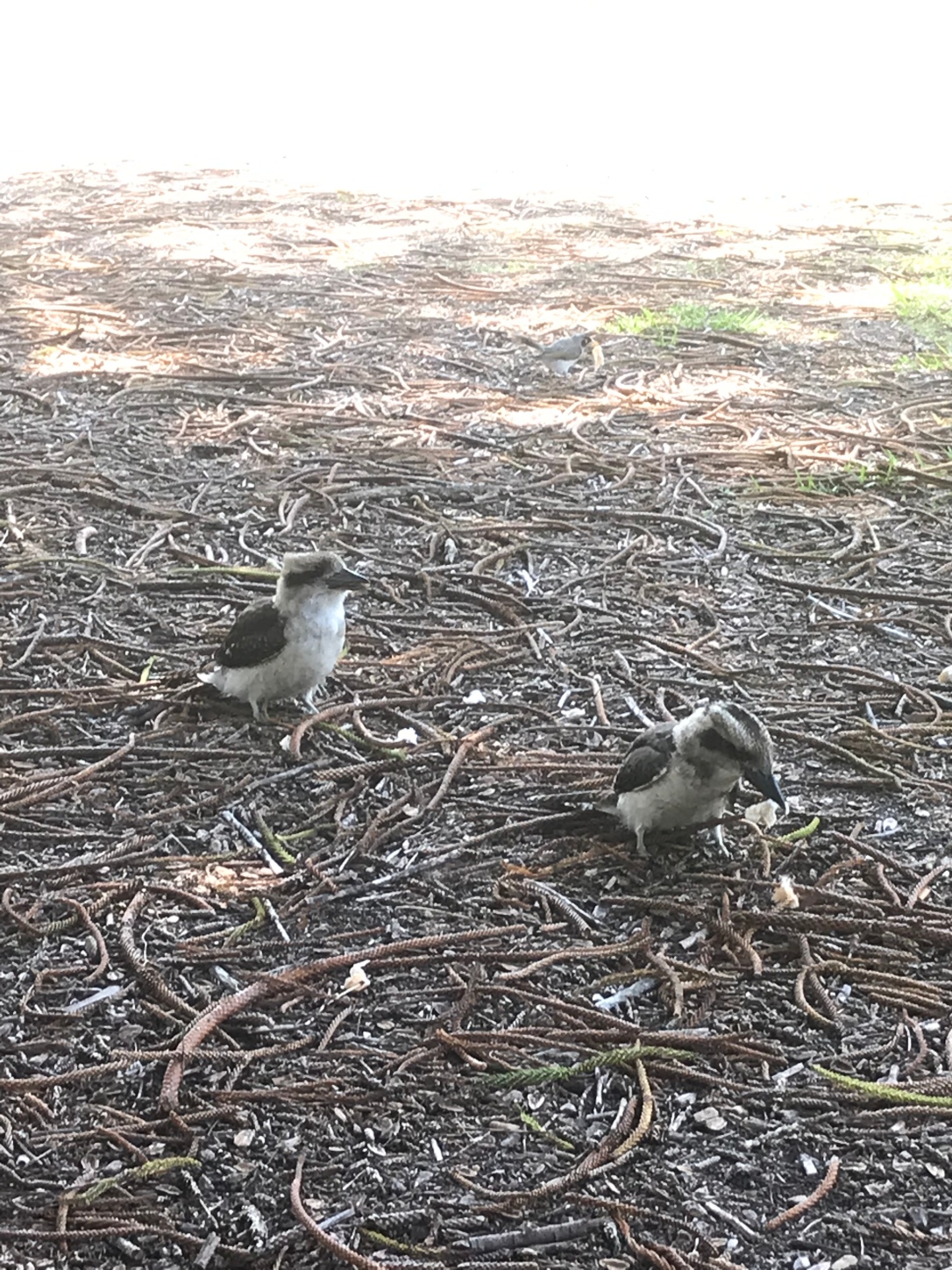 After lunch there was more time to relax in the Bay so Cam and I decided to walk along the beach and explore the surf club area. It’s just as you see it on TV and yet very accessible for public use, with another beach side cafe attached to the surf club. 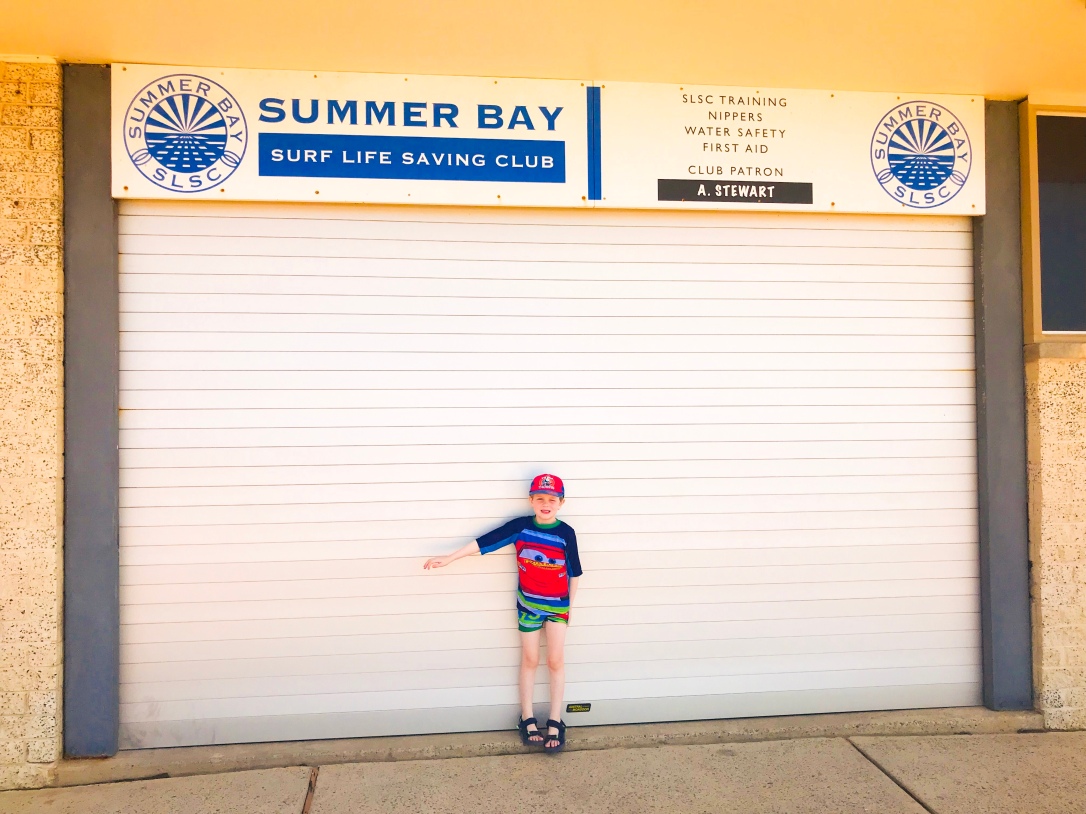 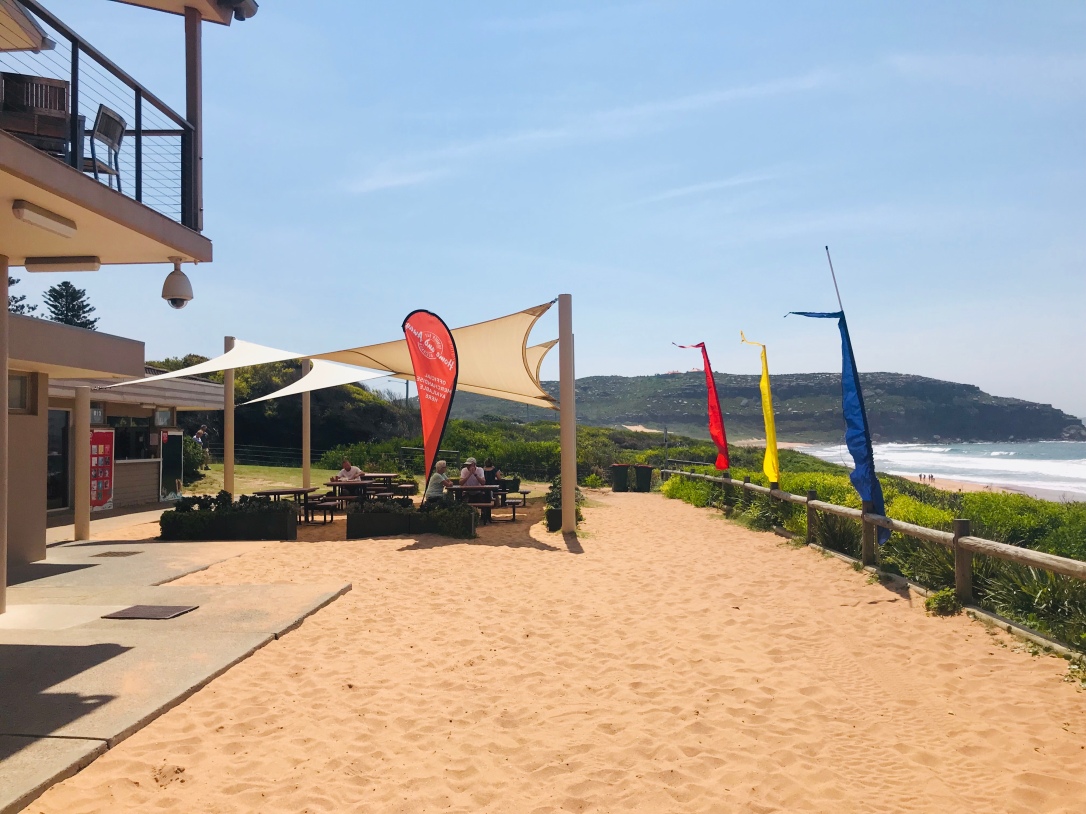 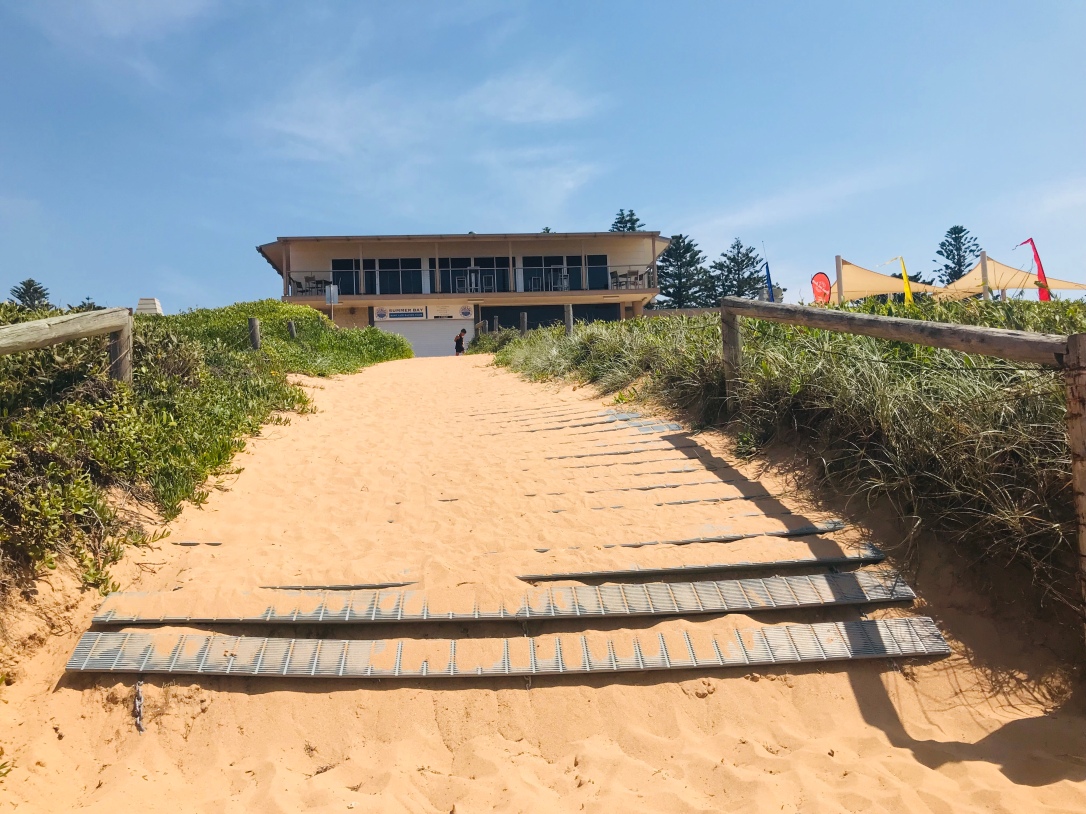 Then it was sadly time to leave. Ross took a more direct route back and the tour ended around 3pm at Manly Wharf. It is about a half hour ferry ride back from there to Circular Quay. We took the opportunity to walk down the main shopping precinct first and take a look at Manly Beach while we were there. It’s very pretty but a lot more crowded than some of the lesser known beaches we have discovered in the area.

The ever popular Manly Beach.

Ross was a fun and informative tour guide and we thoroughly enjoyed our excursion with him.

Ross also has a brand new excursion website and new tours are being added regularly, so do take a look: www.goexploreos.com

MUM’S TRAVEL BLOG IS HAPPY TO RECOMMEND THIS HOME & AWAY TOUR and GO EXPLORE. 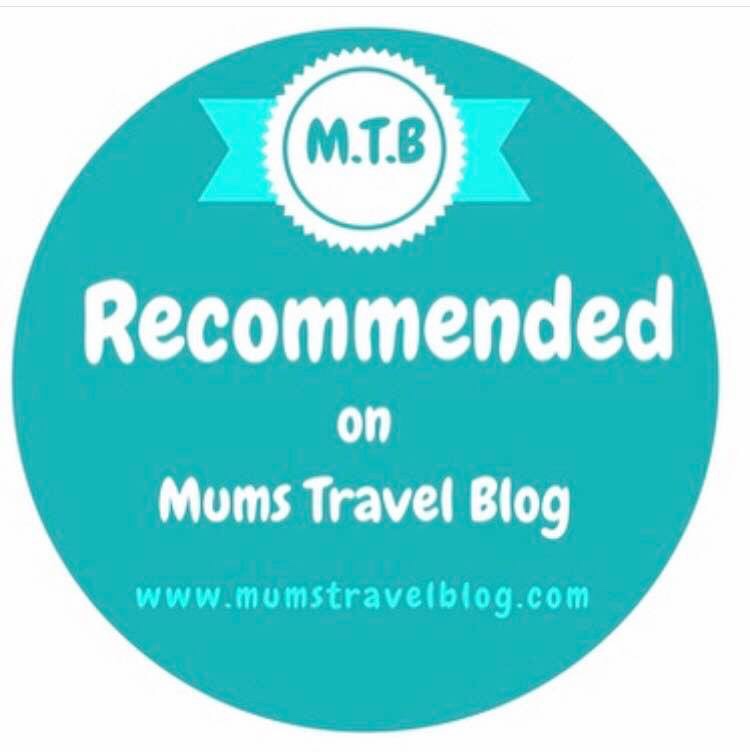