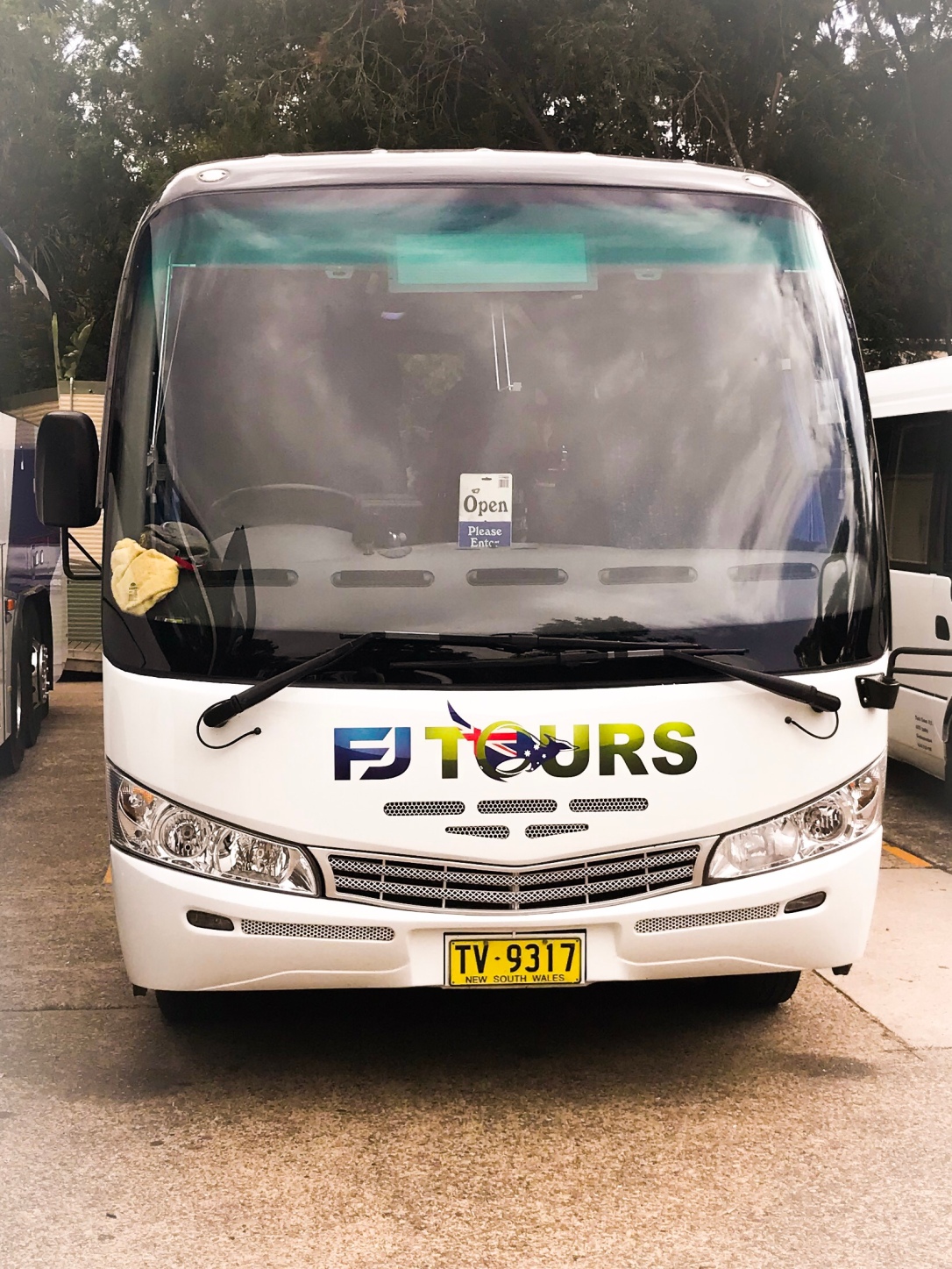 There seem to be lots of tours out of Sydney to the Blue Mountains so it’s hard to know who to go with but when I picked up a leaflet for FJ Tours which combined a trip to both the Blue Mountains and Featherdale Wildlife Park it ticked two of the places I wanted to visit and hence I booked with them. I am truly glad that we did as they really did offer the most fabulous day out.

We were collected at 7.15am right outside of our hotel in Surry Hills (The Cambridge Hotel) and welcomed by our driver and guide for the day, Graham.

Now let me just start by saying that I have been on many, many tours and excursions over the years and in many different countries and Graham was THE best tour guide that I have ever met. He was friendly, knowledgeable, genuinely interested in his passengers and he’s guy who very obviously loves his job, and that shines through in abundance.

The first hour of our trip was picking up other passengers from various hotels in the Sydney area, it’s never the most exciting part of any excursion but it often comes with the territory and Graham immediately made it interesting by keeping us updated on where we were and where we were going etc.

Then finally, we were on our way out of the city and heading towards our first stop which was the Featherdale Wildlife Park.

Featherdale is a beautiful place to visit, it is a fairly compact wildlife centre which houses the smaller Australian animals and birds and is most definitely worth a visit. You can walk among the wild birds, kangaroos and rock wallabies and can even get to feed them by hand which my son absolutely loved: 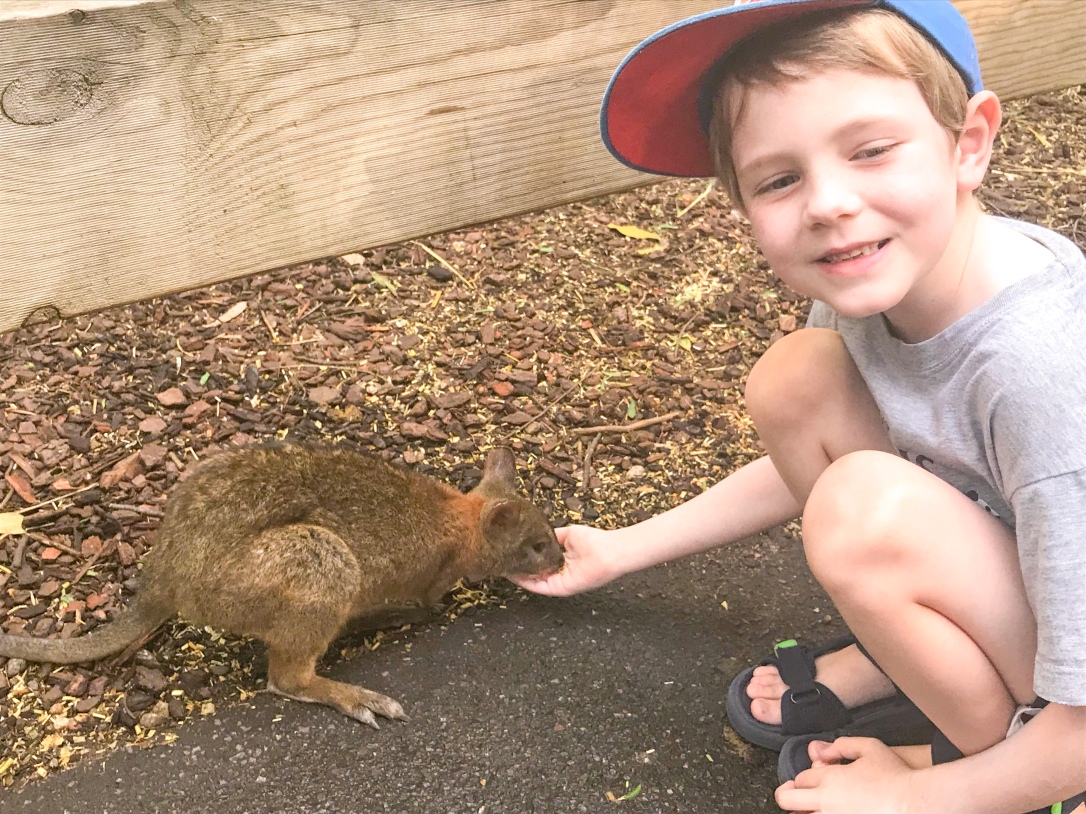 Don’t panic though, the wilder animals such as the Dingo’s and Tasmanian Devils are safely behind bars!

At Featherdale you also have the option to have have a few minutes up close and personal with a Koala, this is an additional $25 but includes up to 4 people, for this you will receive a framed souvenir photo, plus the staff will take a photo on your own phone too.

We left Featherdale at around 10.15am and within 25 minutes we were starting our ascent into the Blue Mountains (if anyone is like me and doesn’t like steep mountain roads, have no fear it is dual carriageway virtually all the way up and no steep hairpin turns or deep drops)

We had the option to include lunch which we did, but in all honestly this was the only part of the day I would have done differently. We were given a picture menu on board the bus with about 8 choices which the driver phones through in advance. There was no kids option even though I asked if there was an additional choice for children and was told “No” so I ordered an adult meal which Cam refused to eat! When we got to the restaurant they did provide childs meals but made me pay again for it, whilst the pre-paid meal went to waste. Mine was ‘OK’ but nothing special, a fairly dry and bland Fish and Chips with a pre-packed chocolate brownie. Certainly not worth the additional $40 and the street in Leura where we stopped had lots of little cafes so plenty of other choices.

After lunch it was time to head to Scenic World which without any shadow of a doubt is the highlight of the day.

Now as someone who has a severe phobia of heights I admit that I had absolutely no intention of initially riding the skyway, however Graham dropped us at one side of the gorge, came across on the skyway with us to give us an orientation briefing and then went back to bring the bus around. I am sure if I had asked we could have stayed on the bus until he came back but as absolutely everyone else was doing it and Cam was very keen, I had a ‘feel the fear and do it anyway’ moment! I have to say that I am very glad that I did, it was no where near as scary as I expected it to be, it only takes a couple of minutes to go across and the views are truly sensational. 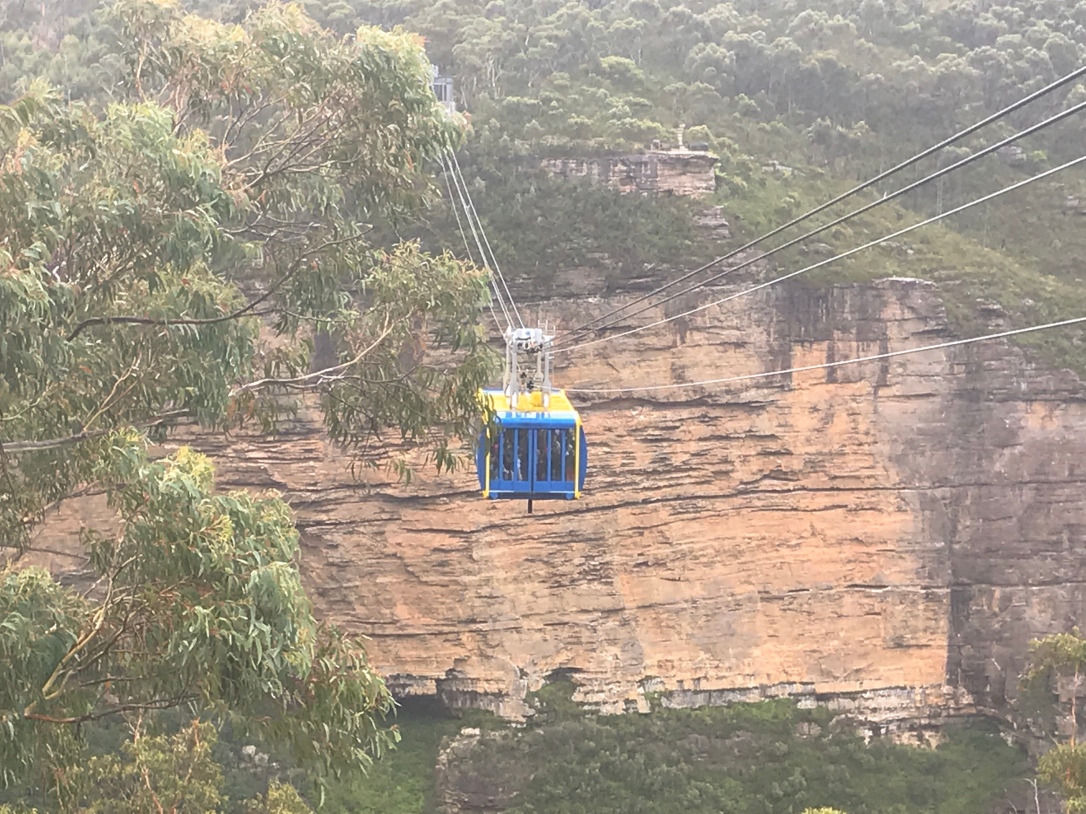 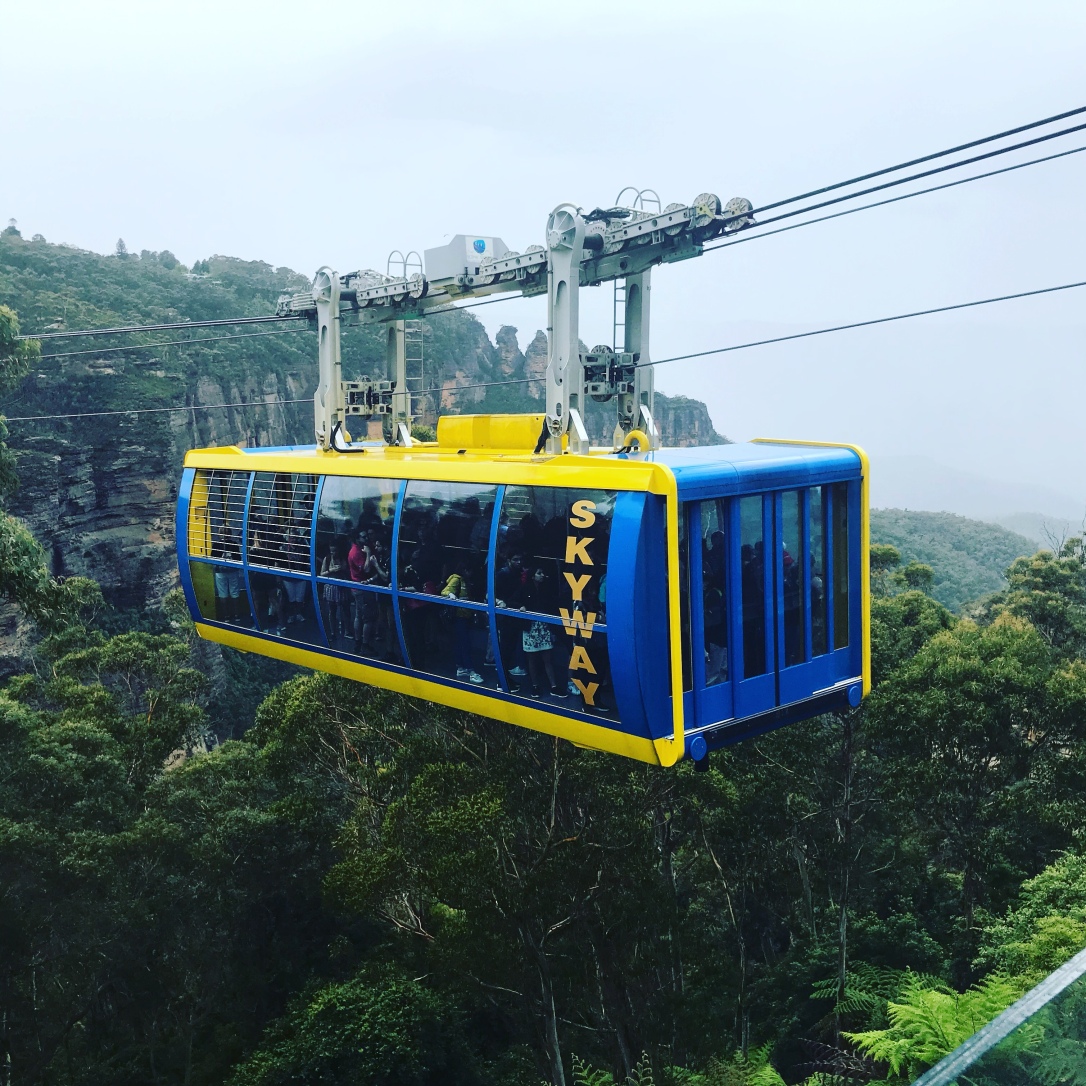 Once across to the main building you will find a cafe and large gift shop. It is here that you can also board either the Scenic Railway (which at an angle of 52 degrees is the worlds steepest include railway) or take the Cable Way down the mountain and enjoy the beautiful rainforest walks.

We chose to descend via the railway, which when you first see it looks steeper than any of the pictures show, but whilst you go down at a reasonable pace it is important to note that it is a railway and not a roller coaster so you don’t get that dropping sensation which makes to feel like you have left your stomach behind. You also look outward rather than downward and the ride down is broken up by quite a long tunnel so you really don’t realise just how steep it it. 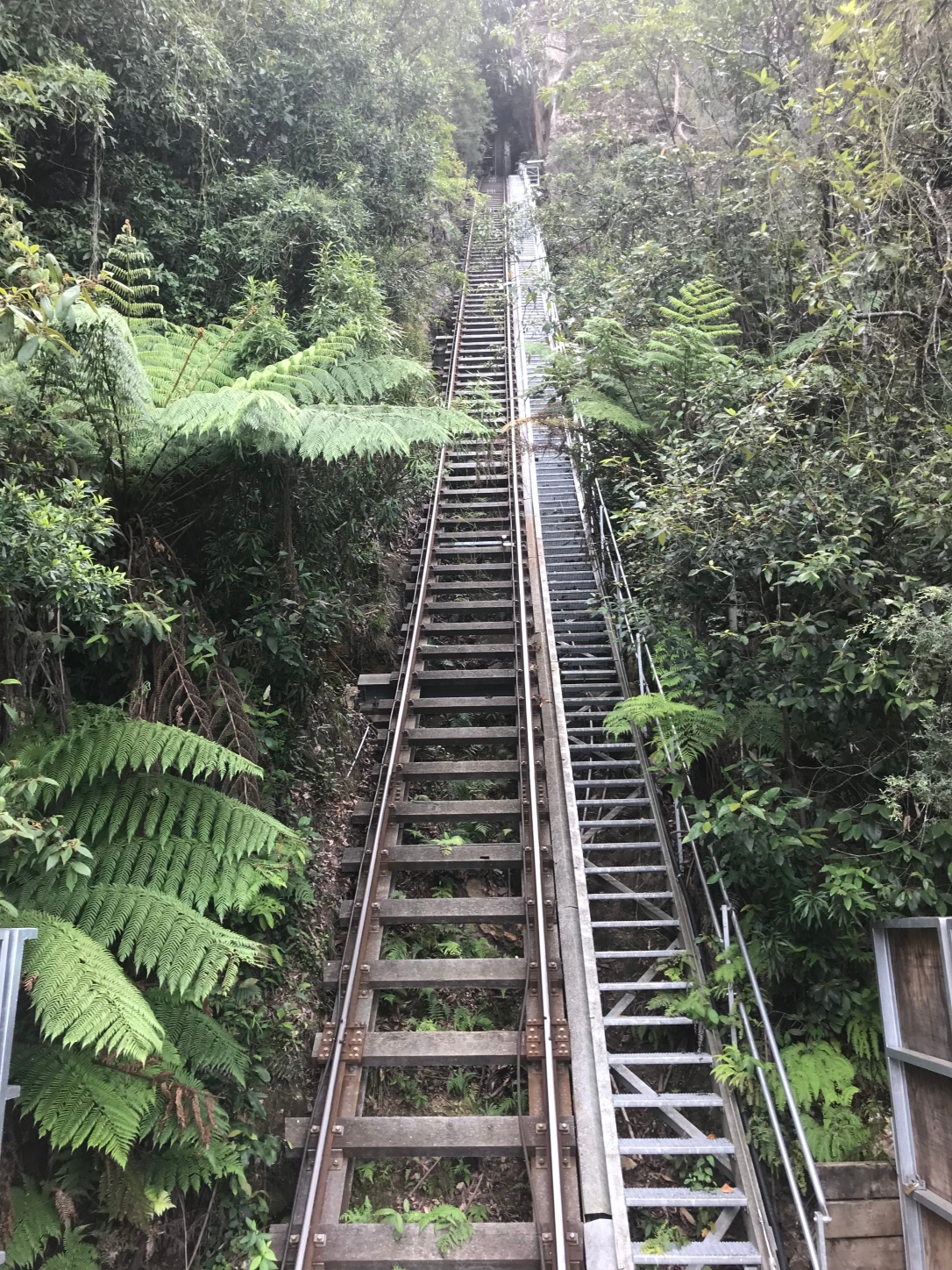 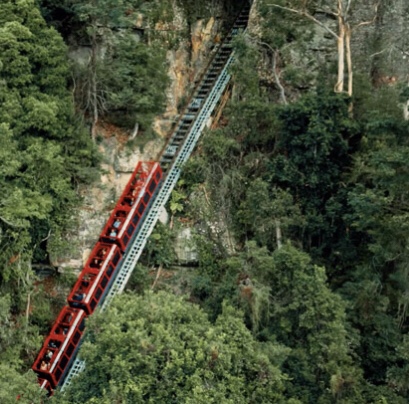 Having descended 310 meters to the Jamison Valley floor, you will enjoy stunning views out to the three sisters and eucalyptus trees as far of the eye can see. (The ‘Blue’ Mountains aptly named so due to a vaper realised from the eucalyptus leaves which when mixing with the atmospheric air creates the blue haze phenomenon).

The are walks through the rain forests which last anything from a few minutes to several hours and these walks will be mapped out and sign posted for you. We did one of the shorter walks due to limited time of the excursion, but nevertheless enjoyable. 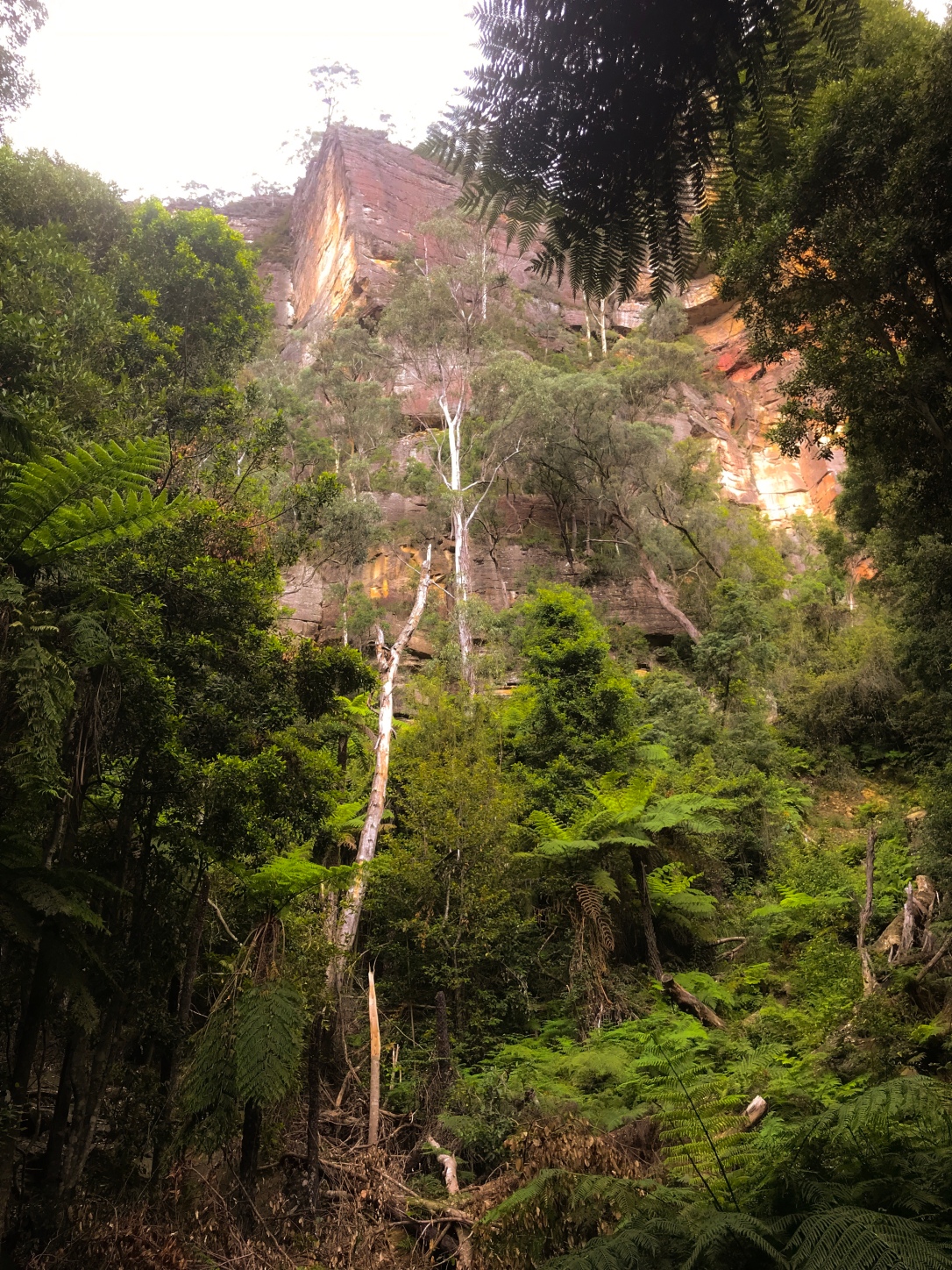 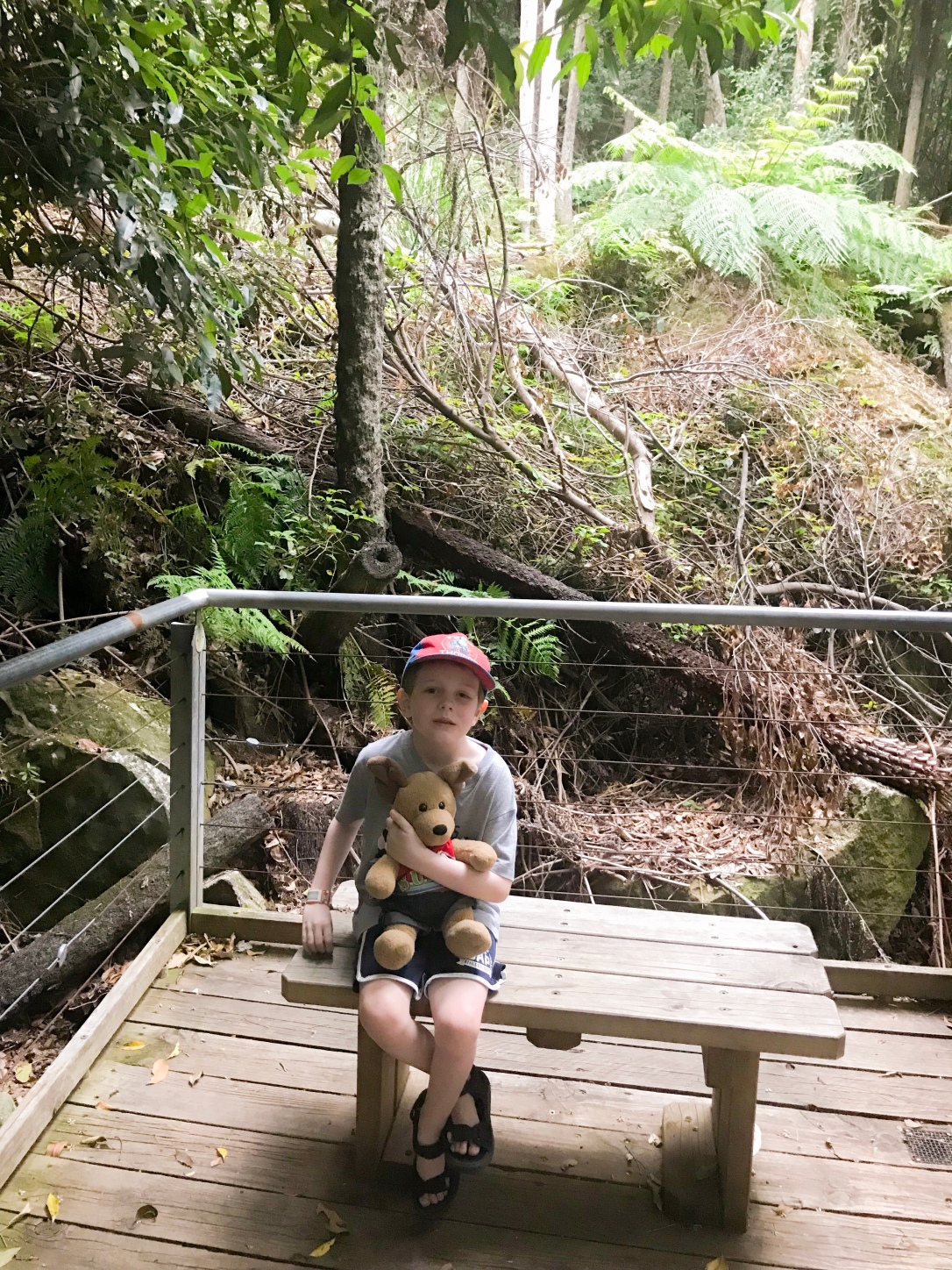 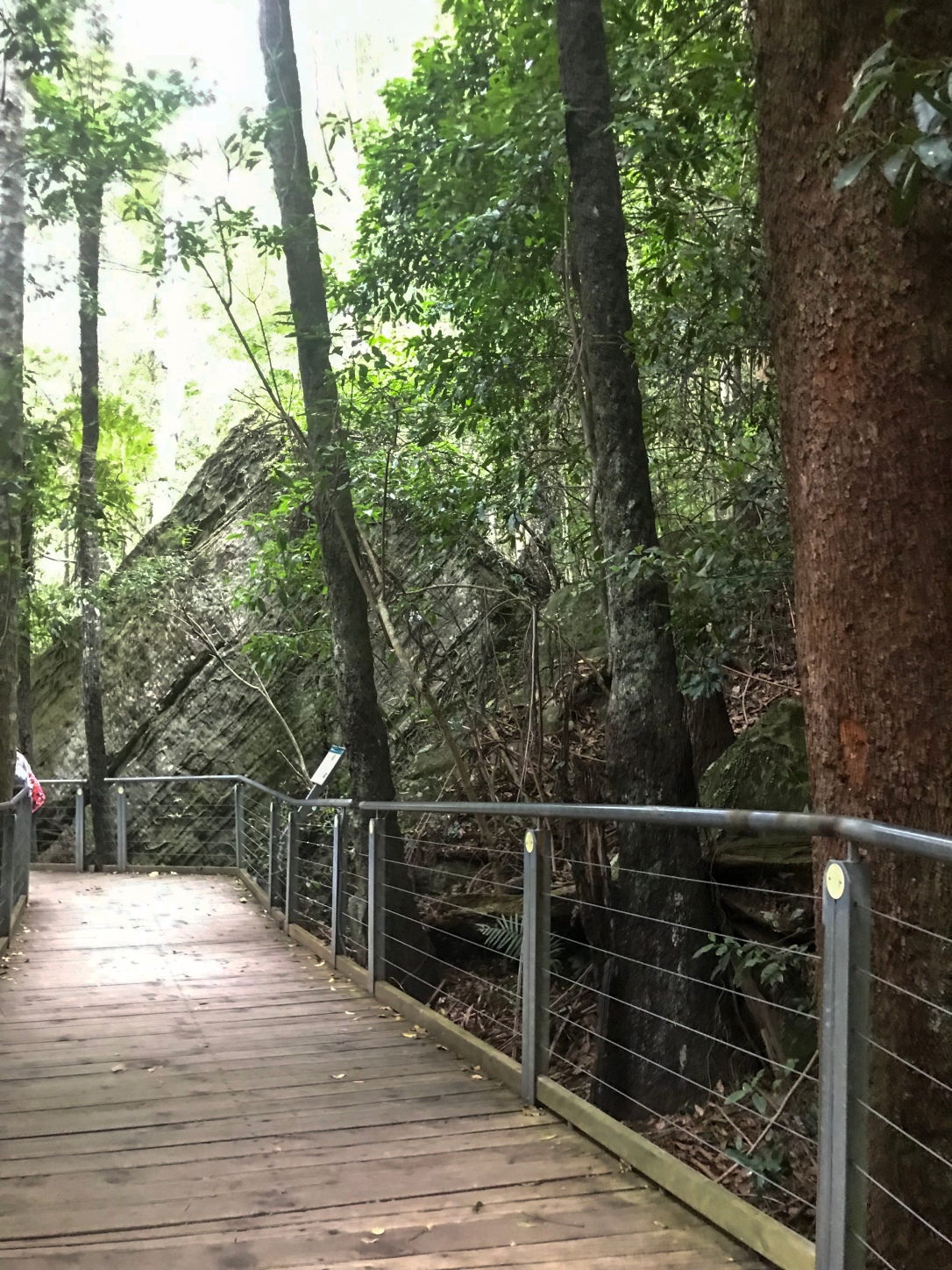 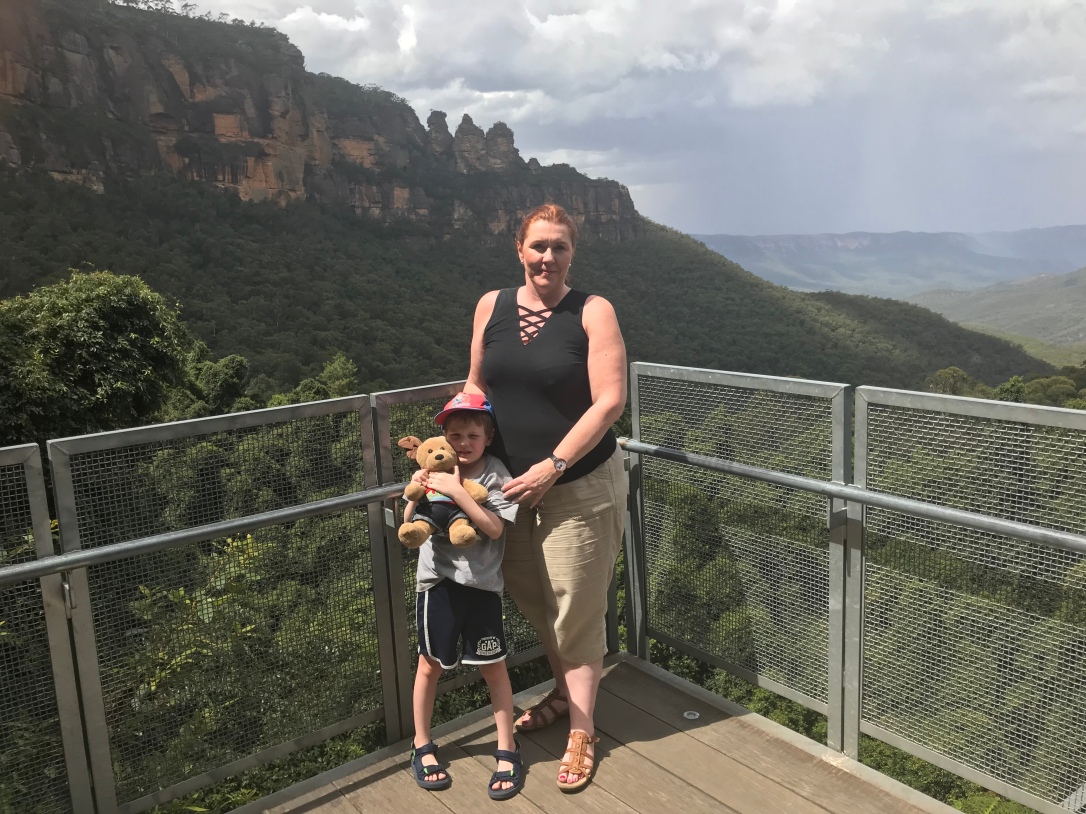 Then it was time to brave the 3rd and final ride within scenic world and ascend the mountain via the Cableway which is the steepest cable car in the Southern Hemisphere – although you can go back up via the railway (backwards) if you prefer! It’s worth noting that if you purchase the ride ticket at scenic park then you can go to and fro on the 3 rides as many times as you wish, so long as you get off first and re-join the queue. 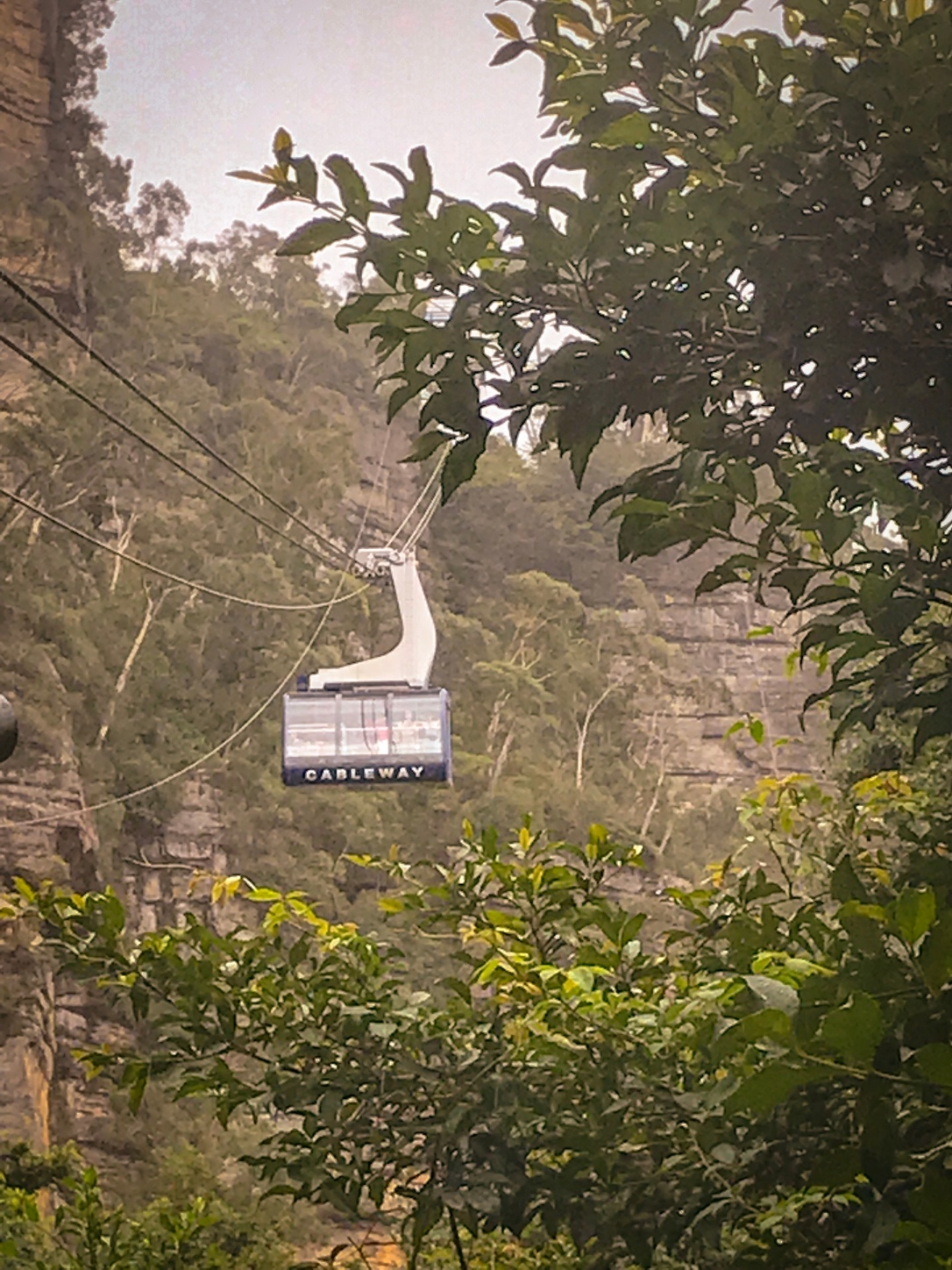 We had around 2 hrs at Scenic Park, then Graham drove us round to Echo Point which was only a few minutes away and from where we were able to enjoy views which can only be compared as Australia’s Grand Canyon. Unfortunately for us it was at this stage that the weather clouded over and poured with rain, so we had a very quick look at the view across then darted inside the little shopping centre for a drink and a look in the Aboriginal shop. 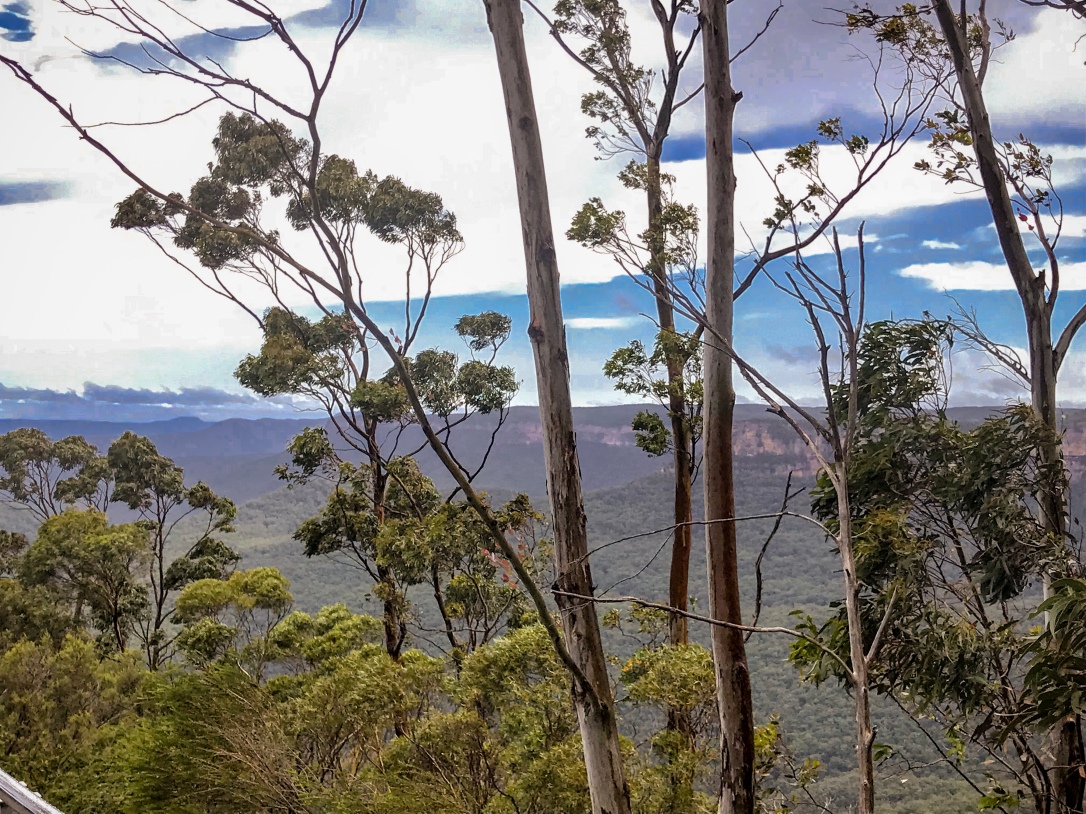 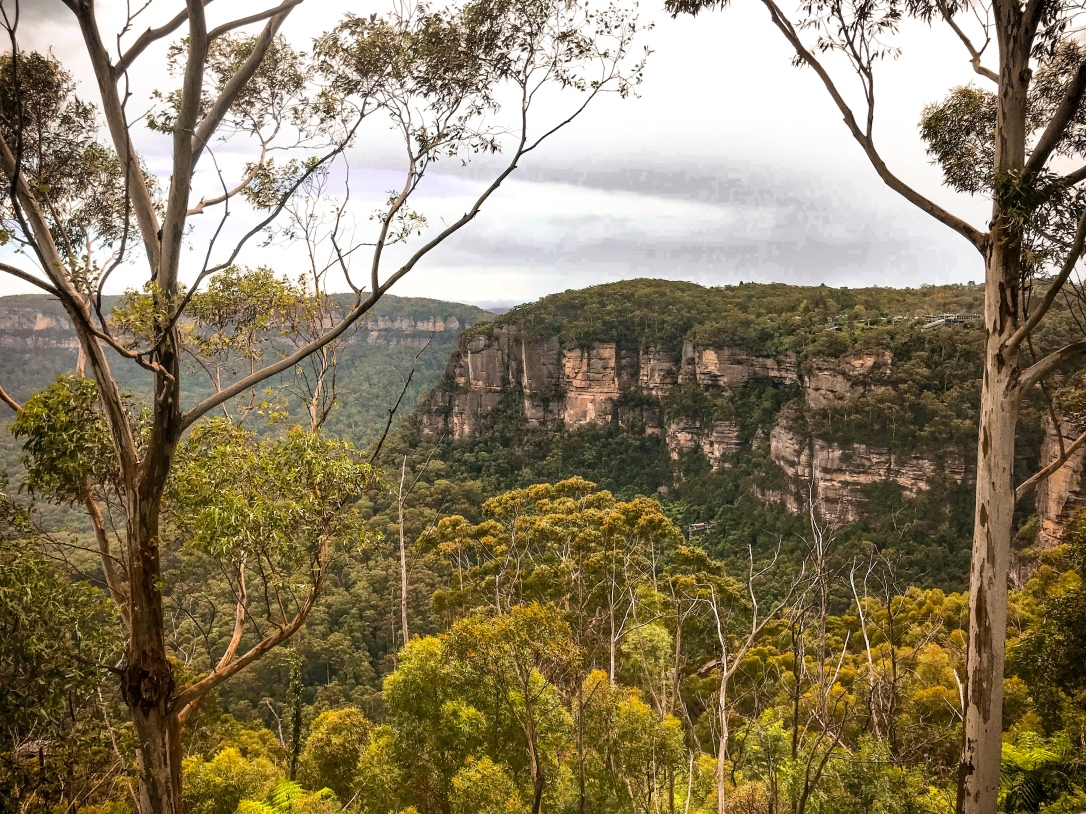 We had about 45 minutes at Echo Point then it was back on the bus for the final part of the day. The drive of around 90 minutes took us to the wharf at Sydney Olympic Park where we boarded a boat and sailed down the Parramatta River back to Sydney Harbour where you can depart at either Circular Quay or Darling Harbour. The river cruise lasts for around 45 minutes.

This is officially the end of the excursion but as we arrived into Circular Quay the sun was setting, so we decided to wait for a while and watch the artistic light show which is projected onto the far side of the Sydney opera house. The projection is shown twice each evening, once just after sunset (whatever time that may be) and the second at 9pm. It is well worth seeing. 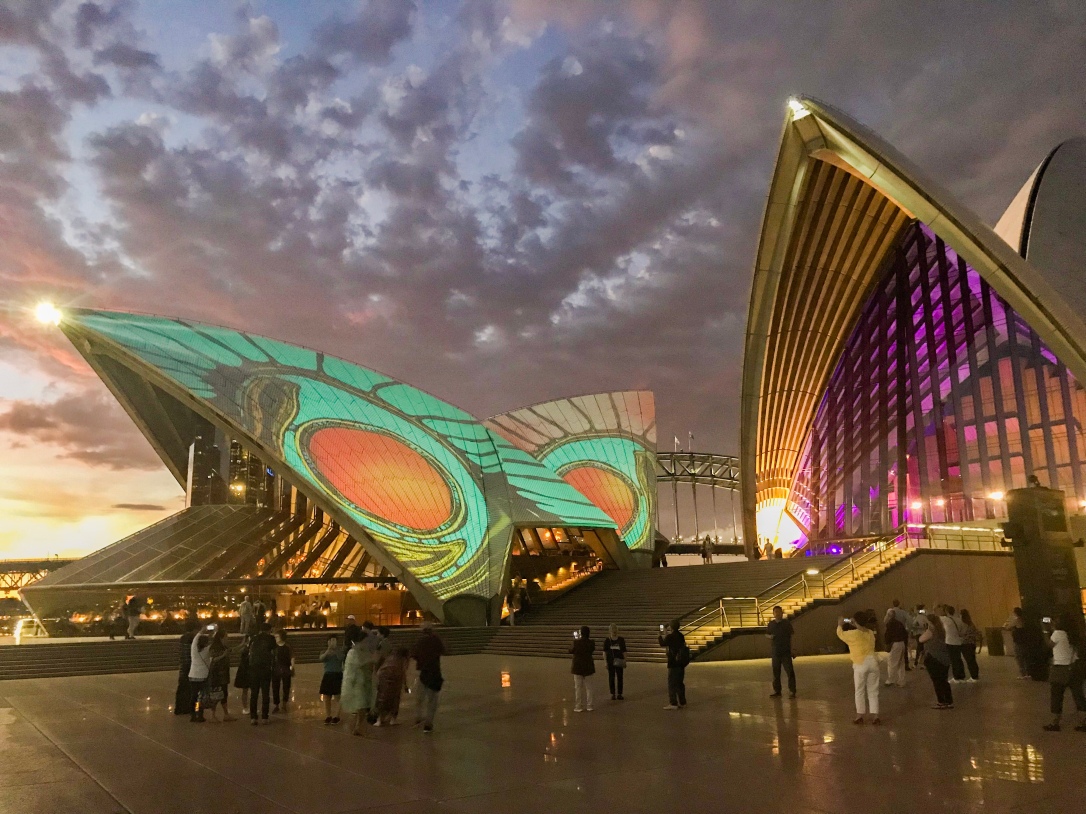 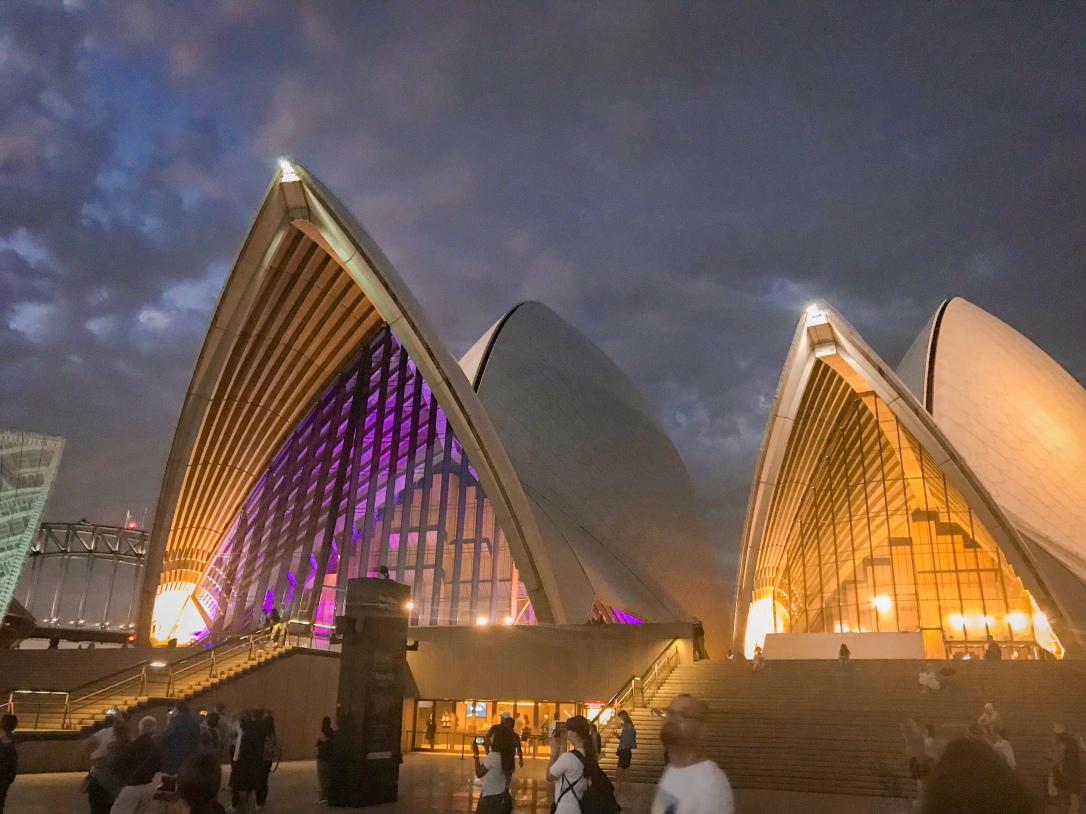 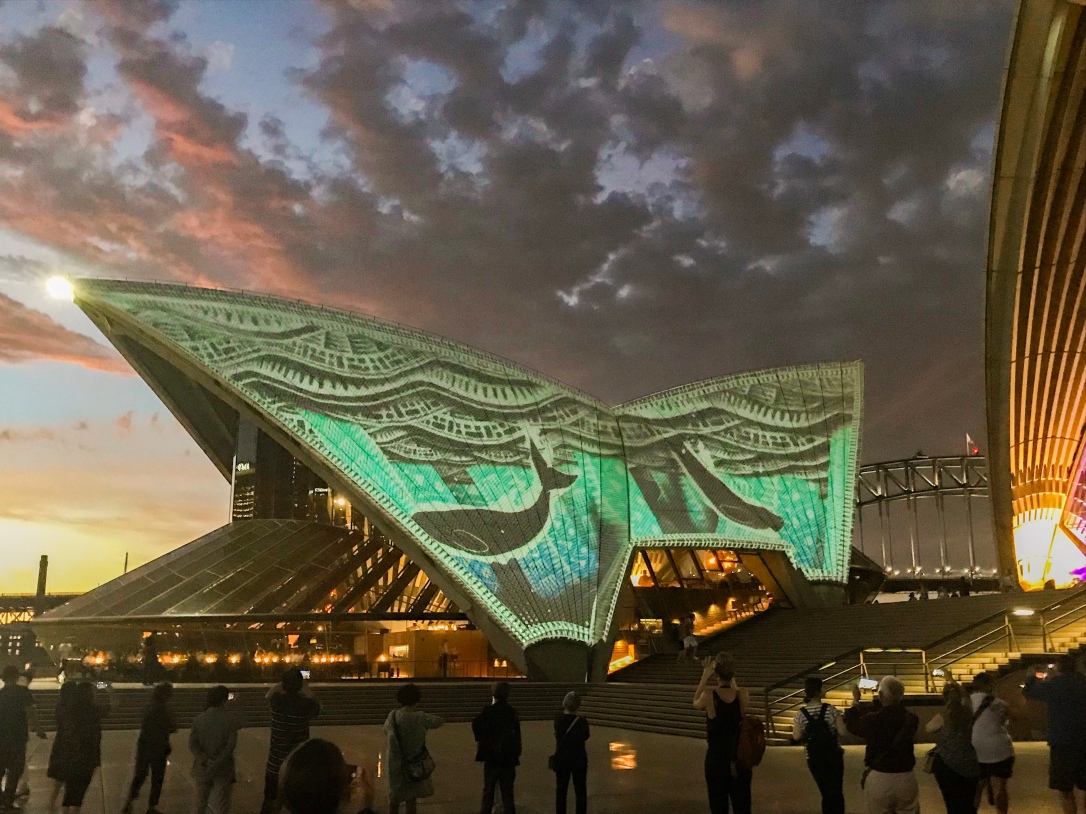 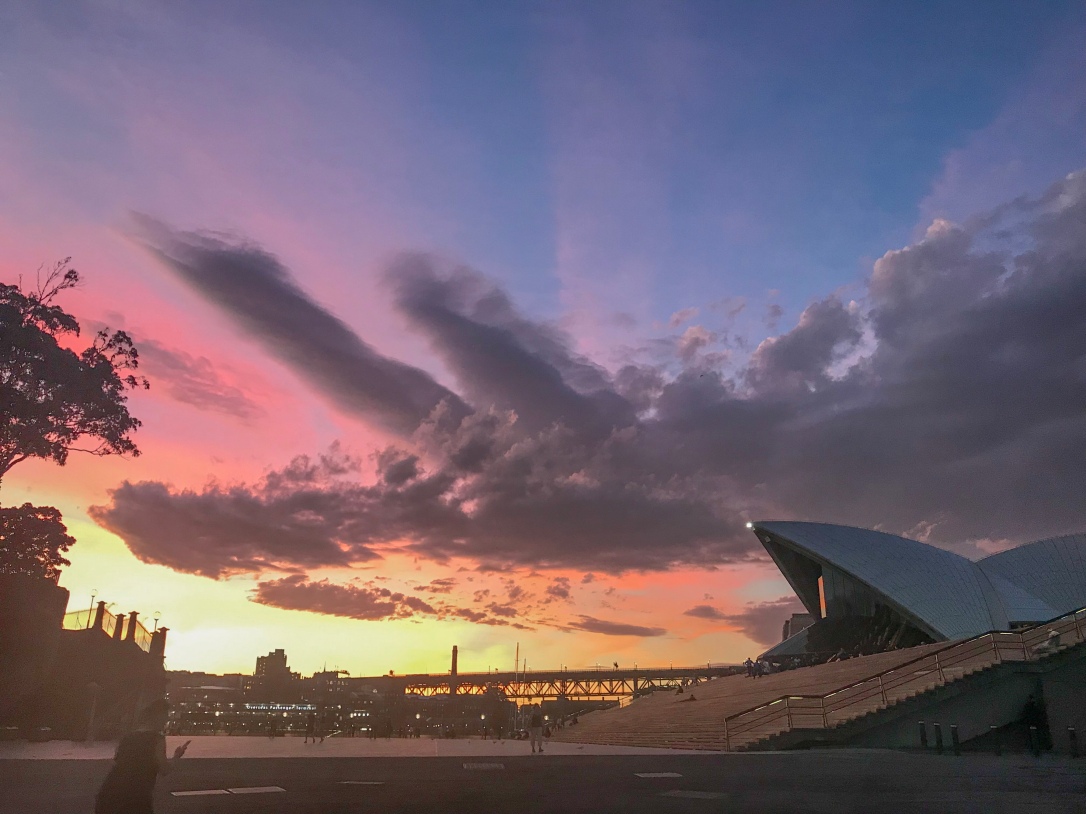 We had a very full and truly wonderful day making memories which we will treasure forever. I am so glad we chose FJ Tours and especially that we had Graham as our driver and guide, he is a true asset to the company.

You can also visit their Facebook page: FJ Tours 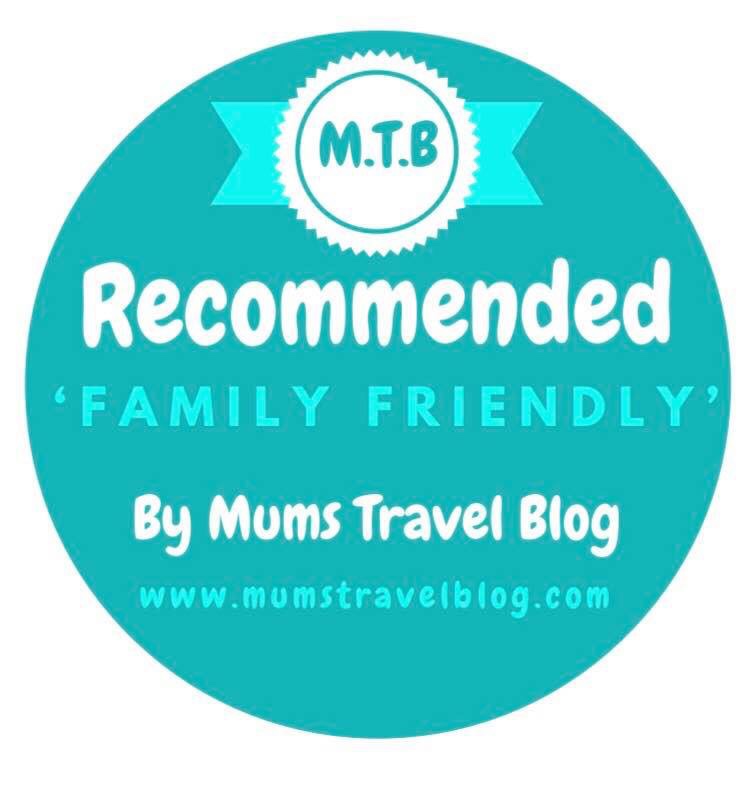