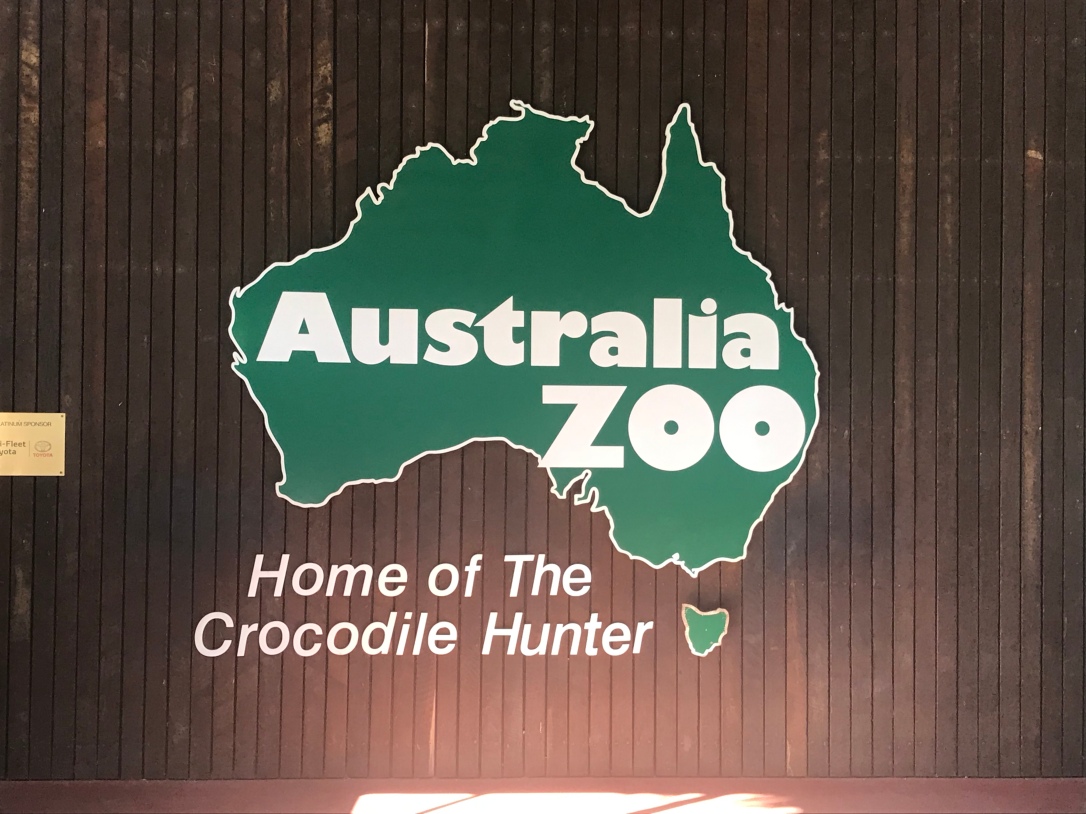 Australia Zoo has to possibly be the most famous zoo in the world now, primarily made famous by the legend that was the late, great Steve Irwin.

I have long been a fan of Steve’s from the early days of watching Crocodile Hunter and thinking “who the hell is this crazy guy” but quickly getting to understand his insatiable enthusiasm for wildlife and more importantly is passion for protecting and preserving it.

I, like many people was absolutely devastated to hear of Steve’s death back in September 2006, especially given the fact that this man who got up close and personal with so many dangerous animals was then killed by a seemingly harmless sting ray. It hit home particularly hard given the fact that just a week beforehand I had been in Tobago swimming with stingrays along with my then 8 yr old daughter and we had admired how majestic and gentle they were.

Like millions around the world I watched with tears in my eyes as his young daughter Bindi bravely delivered a heartwarming tribute to her Daddy at his memorial service, and have in fact re-shown that clip on many occasions when I have been delivering training to funeral celebrants back in the U.K. . I have always felt it is an absolutely beautiful example of how courageous and inspiring children can be at funerals when given the chance to speak about death openly and honestly.

Around 4 years ago whilst Cruising the Caribbean on the Celebrity Eclipse, I was additionally privileged to sit through a fascinating talk given by the cruise director who was a personal friend and former close colleague of Steve Irwin’s. The lecture sensitivity gave a detailed insight into Steve’s childhood, the work of his parents and a family background which truly made you understand where his built in passion for wildlife came from at an early age and how Steve in turn passed that onto his own children.

Anyway cutting a longer story short I had been a longing for many, many years to visit Australia Zoo and hence when planning our round the world trip and in particular our Australian itinerary, the zoo was on our ‘must do’ list. I knew it would also be a very educational experience for Cameron.

We have had quite a few animal encounters as we have been travelling the globe as I feel it’s an important part of Cameron’s world schooling, he LOVES animals but I also want him to understand the importance of conservation as well as environmental issues such as plastic pollution, global warming, recycling etc. Even at just 7 years old he is already understanding that in his own little way he can do his bit and make a difference.

Australia Zoo isn’t really a ‘Zoo’ in the tradition sense, but rather a world leading wildlife encounter quite unlike any other. It’s not just in the compassionate way that the animals are kept and treated, but the passion and enthusiasm of all the staff who care for them – it’s rather like each and every one of them had been ‘Irwined’ ( I’m not sure if that’s actually a word, but suffice to say that Steve’s special brand of magic is emulated throughout the entire Zoo). 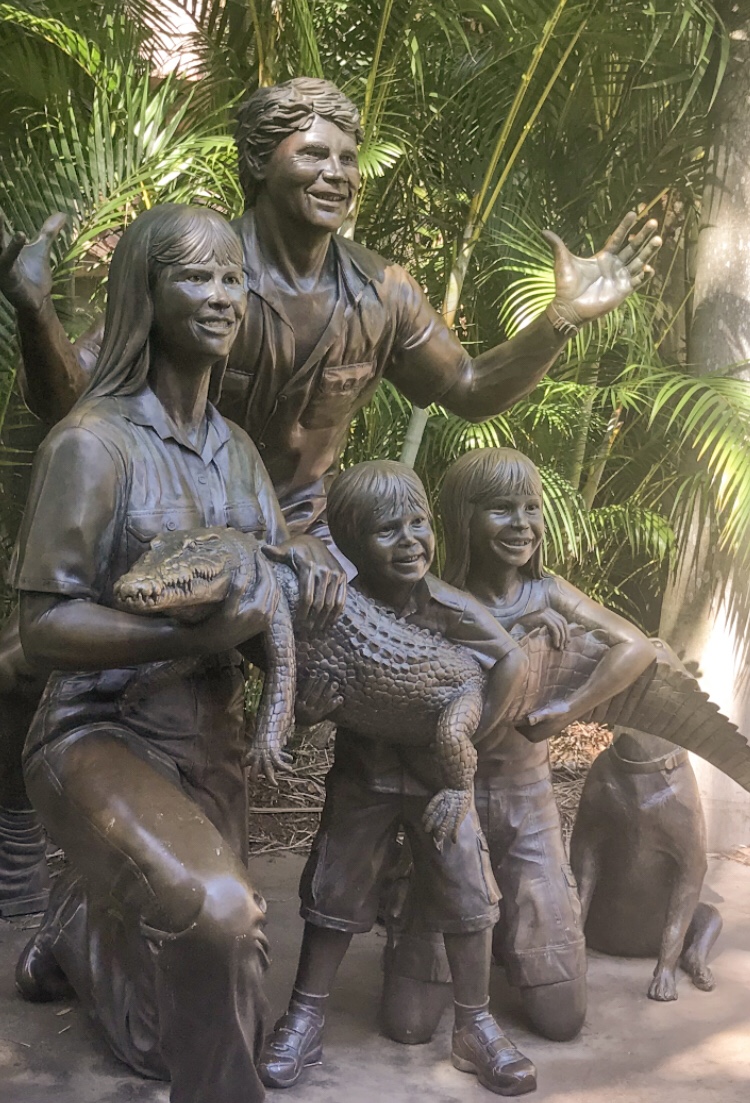 The Irwin family sculpture stands proudly inside the entrance as a reminder that family is still very much at the heart and soul of this zoo with Terri, Bindi and Robert very much involved and hands on. My friend visited the zoo just a week before us and was fortunate enough to bump into Terri & Robert, sadly we were not so lucky! Their presence is felt wherever you go around the zoo however and you can’t help but feel just a little overwhelmed knowing how enormously proud of them Steve would be. If ever there was both a legend and a legacy then Australia Zoo is the place to find it. As an aside young Robert Irwin’s photography is truly outstanding for a boy of his tender years with many of his prints now on sale in the shops as well as being added to several items of merchandise. If anyone deserves success then it’s the Irwin family and you only have to look around the zoo to see how much money is being invested back into it.

Alas my own photography skills don’t even come close so I had to be content with my selfie of the day with a raspberry blowing kangaroo!!!

Cameron also adored the Kangaroos and just loved the opportunity to walk among them and to hand feed them. I swear he would have been happy to have stayed the whole night with them too if I had given him the chance. 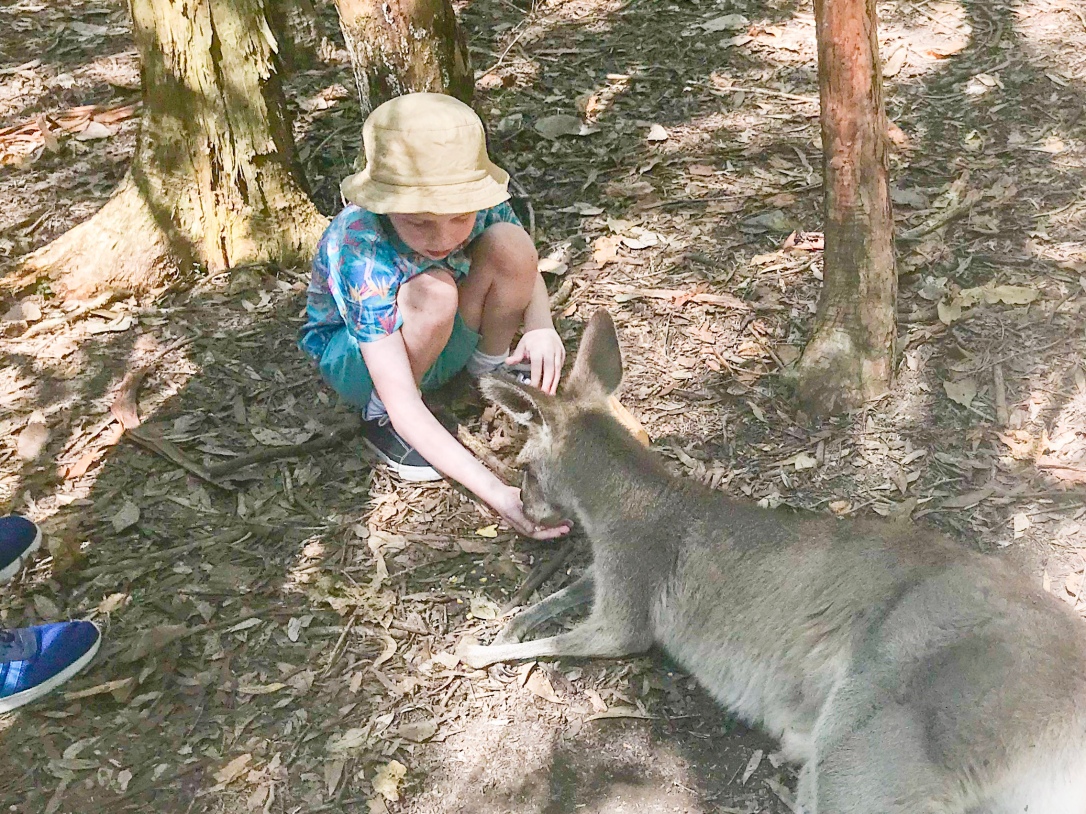 Of course Steve Irwin’s ultimate legacy is the work which he did with crocodiles and no visit to Australia Zoo would be complete without seeing a display at the crocoseum; a specially built arena for people to come and observe the crocs close up. The crocoseum was the fulfilment of one of Steve Irwin’s dreams and on the day of our visit we got to observe ‘Charlie’ being fed. He was certainly on good form. Even though the keepers are highly experienced handlers and the crocs are moving in this environment every day, it is still a breathtaking moment as the croc slowly moves forward on its ‘prey’ and snatches the food from their hands …miraculously leaving the hand in tact!! 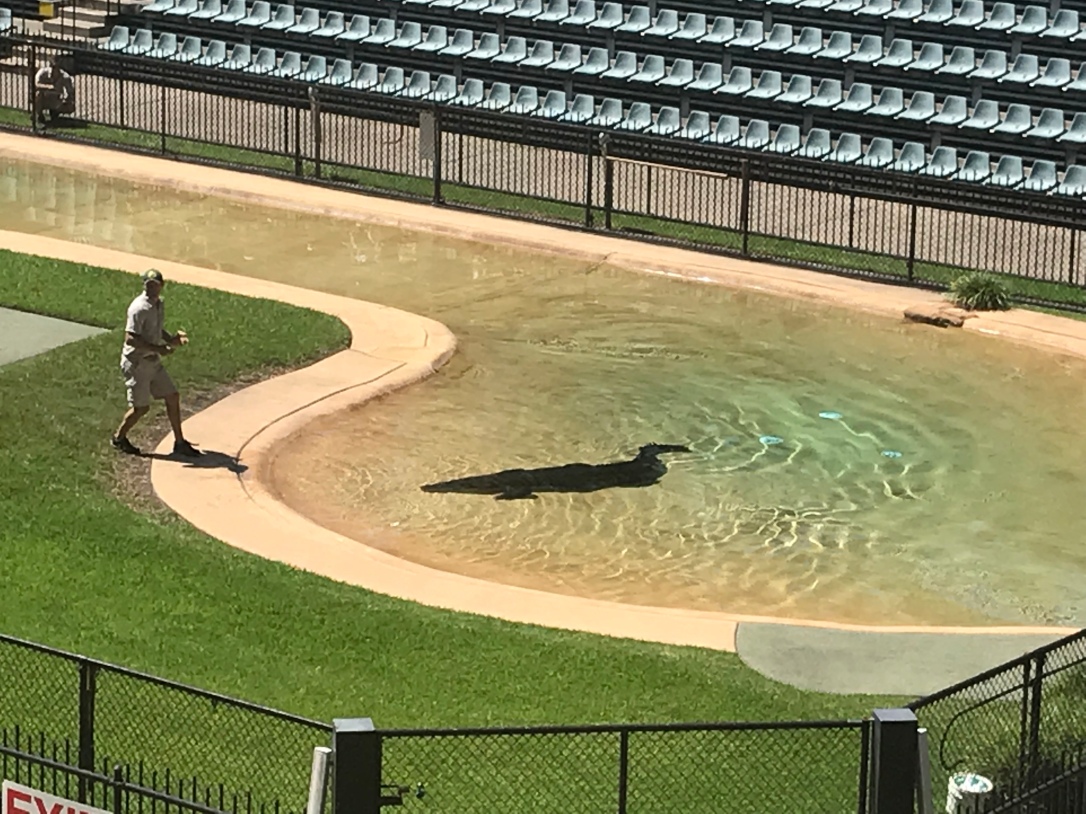 Charlie the Croc at the ‘Crocoseum’

I have spoken several times about adding ticks to my bucket list as Cameron and I travel the globe, Australia Zoo was another one of them and well worth travelling over 16,000km to see. If anyone inspired us all to live our best life it was Steve Irwin, his family now carry on that legacy in allowing us to interact with these beautiful creatures up close and personal. World schooling has been the best decision that I ever made for my son and I know his day at Australia Zoo will be one that neither of us shall never forget.

1 thought on “AUSTRALIA ZOO – The legend and the legacy.”